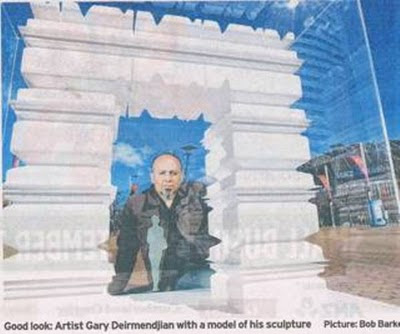 In the news on Monday...

Gary Deirmendjian's commissioned sculpture Arc de Triomphe Individuel which was designed to celebrate the tenth anniversary of the Sydney Olympics will be shown at Sydney Olympic Park from the 15th September.

"Deirmendjian says he used a generic electrocardiogram read-out as the basis for his sculpture.

A computer-controlled hot wire was used to shape the sides of the arch into the same pattern. Unlike the victory arches of the classical world, Deirmendjian's arch refers to individual achievement."

Email ThisBlogThis!Share to TwitterShare to FacebookShare to Pinterest
Labels: Gary Deirmendjian, In the news