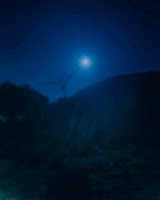 Simone Douglas, Promise II and III, 2006, C-Type Print, 90 x 72 cm each
New York based artist Simone Douglas will exhibit work as part of the 2010 Pingyao International Photography Festival which begins on the 20th September.
Held in the ancient section of the city of Pingyao in Shanxi Province, the Pingyao International Photography Festival will represent more than fifty countries including the work of many renowned Chinese and international photographers.
Simone Douglas's work will be shown alongside that of fellow New York based photographers Arthur Ou and Jim Ramer, in an exhibiton curated by Jim Ramer.
Including works from her  Sky of the Skies and  Promise series, this exhibition will allow Simone to continue to engage with Chinese culture and local audiences, following recent trips to China with students from New York's Parsons The New School for Design,  China Academy of Arts, Fudan University Shanghai Institute of Visual Art (SIVA) and Tongji University.
Known as the Exquisite Corpse project and based on the Surrealists’ idea which involves one idea being shed in order to reveal the next. At the core of this project is the concept of the site or the space between or connecting the sites, as mediated by wandering.”
Simone Douglas's work can be seen in Stand In Landscape as part of the Pingyao International Photography Festival from the 20th - 30th September, 2010.
Posted by Rhianna Walcott at 3:51 PM