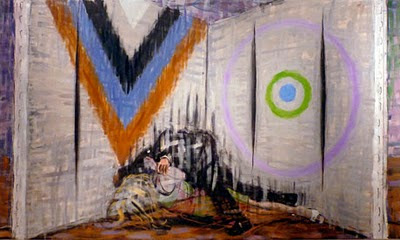 Villain of the piece ... Chris Bucklow's Flatlands depicts art critic Clement Greenberg trying to push a woman into the flatness of the picture. Photograph: Chris Bucklow

Not many critics write anything that outlives their time. The exceptions deserve to be regarded as rare geniuses – the greatest example being that eminent Victorian John Ruskin, whose criticism is unrivalled as both writing and thought.
The American art critic Clement Greenberg was no Ruskin. His clipped, effective prose did not rise to those heights, nor did his ideas about art have the generous scope and grandeur of Ruskin's cultural vision. Yet Greenberg has achieved immortality of a kind. He flourished as a critic in New York from the 1940s to 1960s, but even today, decades after his best-known work and 17 years after his death, he is a totemic and constantly invoked voice on modern art. Almost all the references are critical – for his views were both extremist and at one time hugely authoritative – but there's no doubt they keep old Clem alive in the mind.
The other day I came up against his infamy in – of all places – a pub in Bath. I was having a drink with the painter Chris Bucklow, who shows with Riflemaker gallery in London while living and working in the south-west. Bucklow showed me one of his latest works – a photo of a huge painting, widescreen like an epic American abstraction, at the centre of which is a man wrestling a woman. Bucklow explained that the man in a suit is Greenberg. He is trying to compress the woman, squeeze her into the flatness of the picture plane, while on the walls around them hang late modernist abstractions that Greenberg once heralded as the future of art.
Greenberg's belief in flatness was at the heart of an evangelical praise for American abstract painting in the middle of the 20th century. As a critic, he championed Jackson Pollock. As an intellectual, he argued that pure abstract painting was the logical and necessary conclusion of modern art. The whole tendency of serious modernism, he claimed, was to strip various art forms down and reduce them to a philosophical core of truth. In the case of painting, this meant escaping bourgeois fantasies of perspective and recognising that painting's reality is that of a flat object; a surface. According to this theory, Pollock – whose paintings are planes of colour – stands as a metaphysical revealer of what painting truly is.
Bucklow's portrait of Greenberg shares the belief of critics such as Rosalind Krauss that Greenberg's cult of the pure modern work of art excluded irrationality, physicality, sexuality and the mess of life. His Greenberg is a gothic villain attempting to push a woman out of this dimension into flatland. Being remembered as an oppressor years after your death may not be everyone's idea of immortality – but perhaps it is the only kind art critics can achieve.
Posted by Rhianna Walcott at 1:20 PM