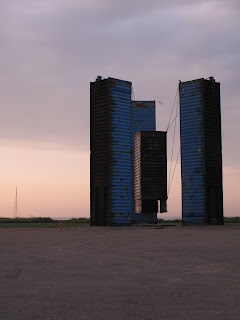 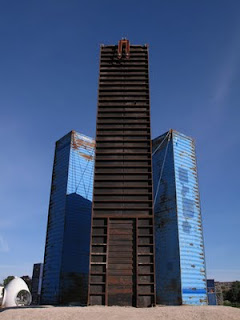 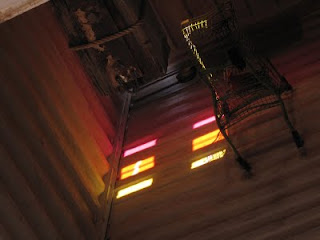 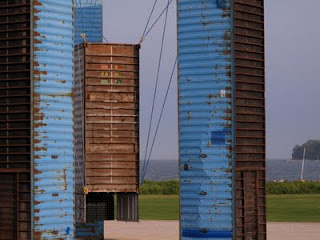 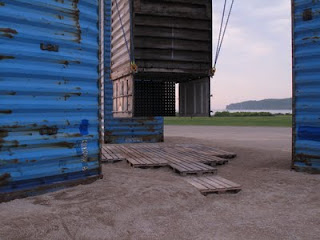 "Standing in a state of stable decay, the work suggests at an architectural proposition.

Its central chamber, suspended above the raised platform comprised of timber pallets, hangs stitched to three giant pillars by way of a network of chains.

When approaching and standing upon the platform, one’s gaze is drawn up into the darkened chamber high above, where light beams through small broken coloured windows onto a shopping trolley, fixed against the opposing wall. It rests beaten, twisted and burnt.

A section of reclaimed wharf suspended by rope near and somewhat lower than the trolley, is a major clue as to the chamber’s more audible purpose. When drawn back by its handling rope and allowed to swing and strike its target surface, the chamber generates a significant deep thud which is heard from some distance away.

While the architecture may hint at a house of worship from a forgotten time, its deity and practices may however feel oddly familiar. Clearly abandoned, the faith that has brought this house into being is no longer dispensed here.

Note: The work is composed entirely of elements that have in a very direct way served in supply chains and hence carry the patina and scars of actual service - ie shipping containers, pallets, pallet jacks, naval rope, reclaimed wharf, shopping trolley."
- Gary Deirmendjian, 2011
﻿Sculpture by the Sea - Aarhus is a formed body comprising of the ARoS Kunstmuseum (http://www.aros.dk/), City of Aarhus and several other patrons including the Danish Royal Family.
Posted by Rhianna Walcott at 1:13 PM

Email ThisBlogThis!Share to TwitterShare to FacebookShare to Pinterest
Labels: Gary Deirmendjian, Sculpture by the Sea