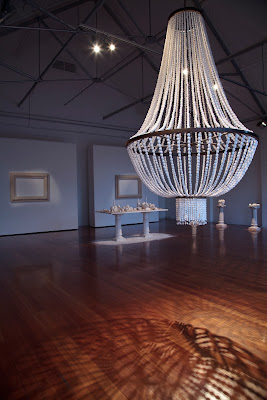 
In 2010 Ken & Julia Yonetani completed a Synapse art-science residency awarded by the Australian Network for Art & Technology (ANAT) which resulted in a three month collaboration on location in Mildura, with scientists at the Murray Darling Freshwater Research Centre and Sunrise 21. Still life: The Food Bowl is the resulting body of work. It is made entirely from groundwater salt that as part of salt interception schemes has been pumped out of the ground around the Murray-Darling in an effort to try and reduce salinity in the river system.
The following conversation took place on Friday 29th April, 2011 between Ken + Julia Yonetani and Cash Brown, curator of Still Life: The Food Bowl.
CB: It is hard to know where to start with you guys, normally I would have heaps of prepared questions, but your practice is pretty intense and you are addressing so many layers of issues and meanings in your work...
When you first start a new project, are all of these issues and concerns already apparent or does it come with the process as well?
KY: Probably the idea first.
JY: Yeah I think it comes with the process. We start getting one idea and then it continues to develop…
CB: So the layers of meaning load themselves in quite naturally? As it doesn’t appear to be a forced process to me, would that be the case?
KY: Yes
CB: In relation to your original idea of a body of work made from salt, did you go to Mildura with Still Life: The Food Bowl as a preconceived idea or concept, knowing about the salinity issues there, or did it happen as a result of spending so much time in the area?
KY: We actually had a different idea before going there, but during the residency, we were inspired a lot by the local people and the landscape, and then also by the information gained from working with local scientists.
CB: But what actually sparked that interest? Was it something you saw, for instance was it the result of anomalies in the landscape which you observed? What was the first thing that tripped off that idea?
KY: We were actually amazed, one of the things that had a really strong impact on us was the juxtaposition in the landscape of the beautiful vineyards and orange tree farms, right next to the flood plains which were completely degraded due to rising groundwater and irrigation drainage, which had caused such increased salinity that nothing could live there anymore.
It solidified in our minds that it would be really great if we could make something out of salt, as a material, because then people could really connect it straight back to the problems of salinity. 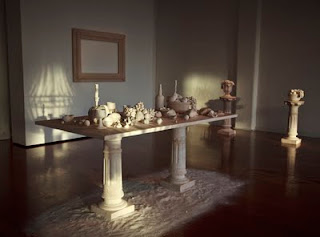 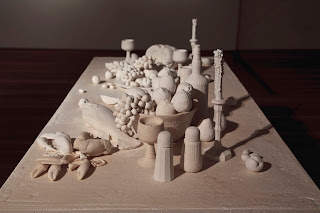 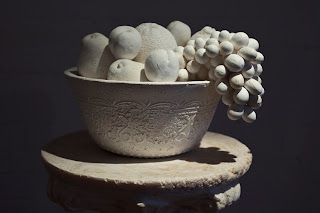 KY: We have to get on, otherwise we couldn’t finish it - this project has been too big to be completed by one person.
Everything is new, and dealing with this material is extremely difficult compared with sugar. And there have been lots of failures.
CB: So no divorce is on the horizon?
KY: Hope not! (Ken and Julia both laugh)
KY: Change the topic!
CB: There is a royal wedding tonight so I thought it was appropriate!
CB: It’s amazing you guys always seem to be so good-humoured, positive and enthusiastic about your work and have a wonderful attitude towards your practice. There is a lot of intrigue around collaborative practice, especially those between husband and wife teams, and there are often questions such as ‘is one person more dominant than the other?’ and ‘are there clashes of ego?’ I don’t get that from you guys at all, it seems to be that everything is done through the power of agreement, is that true?

KY: We have been together a long time, I think we depend on each other, we are always talking a lot, on many topics, and so we get ideas from talking together and ideas become clearer and better by talking about them.
JY: It helps that we didn’t actually start off doing art together, we have been through a lot of stuff before we started doing this, so maybe our relationship was at a place where it was pretty strong at the time. It had to be strong enough for both of us to start doing stuff together. I think the relationship didn’t build up through the art, the relationship built up first, which then made it possible for us to start working together.
CB: Well its certainly very fruitful, pardon the pun!
JY: We take things with a grain of salt.
CB: Nooo! (Moans)
CB: So have you been throwing any (salt) over your shoulders lately?
JY: We do every morning before we look at the news of the day.
CB: Has that (the Japanese tsunami, earthquake and resulting nuclear crisis) affected your work, in terms of a world view and issues not unique to us here in Australia?
JY: We think the work is really relevant in the sense that half way through, we started thinking of it on a more global scale but it wasn’t just connected to Mildura, it was this idea of the decline of civilization. Do you know that book by Jared Diamond, Collapse: How Societies Choose to Fail or Succeed . He goes through societies throughout history and looks at how humans have wrecked their environments to the extent that these societies can no longer sustain themselves. The most obvious example is Easter Island, so salt really becomes a metaphor for this idea because obviously there have been major empires in the past that have over irrigated and turned fertile land into desert and have had to leave areas that have became too salty as a result - for example in Mesopotamia and in South America… The more you look into it the more you find this has happened in so many different ancient civilizations.
The idea of wrecking our environment and ultimately leading to our own decline is an issue related to Mildura, but you can also say it is totally connected to Fukushima and the devastation of the environment and the issue of food security – the fact that people aren’t going to be able to produce their own food anymore. Especially in Japan in the northern areas where they are extremely sustainable, they eat what is locally grown and caught from the sea, as well as vegetables they have grown - some estimate that 70% of what they eat is from the local area.
KY: When I stayed in Mildura I was surprised that local people were eating food from big supermarkets like Coles or Woolworths and that the food isn’t from the local markets, it’s from Sydney. So they are growing food, it travels to Sydney to market, then it is transported back to Mildura, so the people are eating local food, but it’s been on a long trip. I think it’s really a modernized consumer society.
It is interesting that in Fukushima, the aid organisations are dropping tins of spaghetti and baked beans so people can eat, but they have never eaten this before and also they don’t like the taste, but they can’t eat anything local because of the radiation. So they have to eat it, they have to get used to it.
This is the extreme end of environmental degradation.
CB: As Julia mentioned earlier, environmental concerns have been a recurring theme throughout your practice and will probably continue to be, as things probably aren’t going to fix themselves. What do you hope is the best possible result of bringing these issues to the attention of audiences? What’s the main message you would like people to take away with them or is it a non prescriptive approach where you invite people to contemplate issues and work it out for themselves?

KY: I hope people get many messages from the work by themselves. I don’t want to try to make them feel captured.
JY: I think the power of art is that you can have a message, but you can also have fun with it, I think that’s what makes art so fun and memorable.
Supported by the Australian Network for Art and Technology, Sunrise 21 and Murray - Darling Freshwater Research Centre in association with the Australian Government through the Australia Council for the Arts, its art funding and advisory board. This work emerged from a Synapse residency in Mildura and versions will also be shown at: Mildura Palimpsest #8: Collaborators and Saboteurs, 9-11 September, 2011 and GV Art, London, 6 October - 22 November 2011.