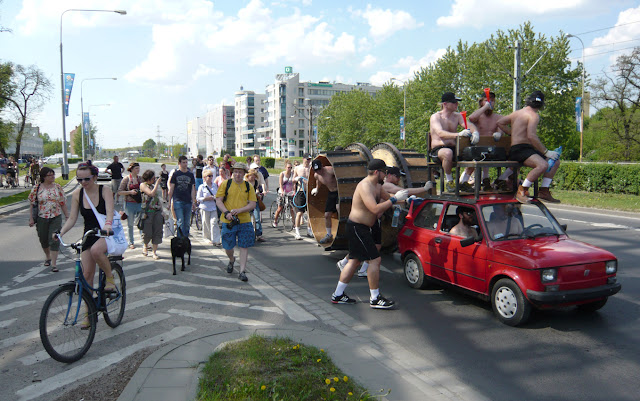 Francis Thorburn's work, Fiat 126 MK DRP1800 18202764, recently took place as a performance and procession in Wroclaw, Poland as part of an artist in residency position and subsequent solo exhibition at the BWA, Museum of Contemporary Art, Wroclaw.

The performance began by leaving from a Tram Depot on Kwiska street on a Tuesday afternoon. Concieved to coincide with Poland's "work day" - the piece involves the transformation of a classic FIAT 126p car into a man powered vehicle. The performance involved twelve men pushing the sculpture through Wroclaw city center ending at the Awangarda gallery. The work is in part inspired by what the artist decribes as "bohimian chad".

Francis' work is also included in an exhibition entitled Les Fleurs du Mal - New Art From London - an exhibition which has been organised as part of OUT OF STH vol 3. at the BWA. OUT OF STH vol. 3 is yet another stage of the internationally acclaimed, award-winning projects: External Artists. Out of Sth (2008) and OUT OF STH Presents (2010), carried out in BWA Wroclaw and city space. The former showed world urban art in the context of gallery approaches to contemporary art, the latter presented the most original examples of artists interfering in city space. This time the project includes exhibitions, realizations and activities concentrating on the issue of the City in its social and political dimension, City as a source of counter-cultural and alternative aspects of street activism, whose idea annexes new spheres of culture.

OUT OF STH vol. 3 is a multi-layered interactive event aiming to change the perception and co-existence of art in city space, within the trends of contemporary visual art, through the presentation of a spectrum of aesthetics, techniques and media, as well as its permeation into mass design. It is a broad presentation of the work of artists tackling urban themes, a new definition and function of the city, common public space, urban design, complimented by music events, performances, meetings, workshops and lectures, during which the artists will be sharing their visions of the city and its unique aesthetics. This art has gone beyond the gallery space and has drawn the attention of much of the wider world, far beyond counter culture.

Francis Thorburn was born in 1985 in Wolverhampton, UK. He studied Sculpture at the Camberwell College of Arts, London. Thorburn has exhibited in numerous exhibitions throughout Europe, most notably as a guest at the Folstone Triennial in 2011. His works have been commissioned by both the Tate Modern and Tate Britain galleries and has recently undertaken an artist in residency position and subsequent solo exhibition at the BWA, Museum of Contemporary Art, Wroclaw, Poland.

Artist sketches and video works by Francis Thorburn including Free Ride, Raft, Vehicle Number 2 (tricycle) and Plank can be viewed in the Artereal stockroom.
Posted by Rhianna Walcott at 2:00 PM