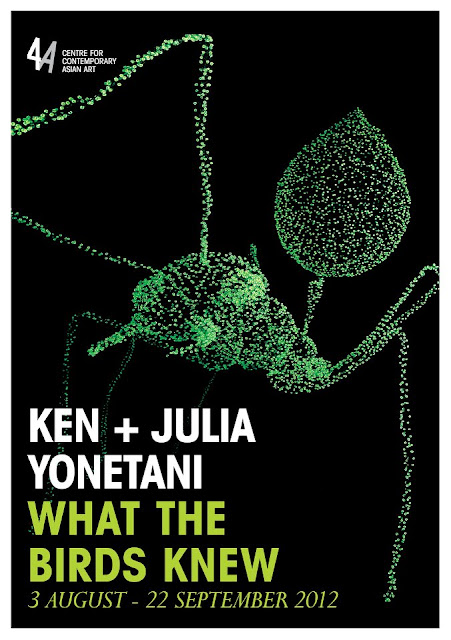 Ken + Julia Yonetani will soon open their solo exhibition What the Birds Knew at 4a Centre for Contemporary Asian Art.

What the Birds Knew includes new large scale sculptural works made from radioactive uranium glass. A 6-metre long green ant will threateningly loom over visitors to the gallery, and a large scale chandelier will be visible 24 hours a day. The use of UV lights will make the uranium glow green, giving the works an ominous energy.

These new visually stunning and highly provocative works arise out of the artists’ concerns over the recent nuclear tragedy in Fukushima. The title of the exhibition refers to the alternative title for Akira Kurosawa’s 1955 post-war film I Live in Fear, in which the central character declares that the birds would flee if they knew of the impending environmental threats.

What the Birds Knew reflects shared cultural expressions of environmental anxieties within Indigenous Australian and Japanese culture, and whether these function as either warnings or premonitions.

Following on from this exhibition, Ken + Julia Yonetani will have a solo exhibition at Artereal Gallery this October. Crystal Palace: The Great Exhibition of the Works of Industry of all Nuclear Nations is a response to the recent Fukushima Daiichi Nuclear Power Plant accident and the phenomenon of radiation. This exhibition will feature a new, never before exhibited installation of Uranium chandeliers.
Posted by Rhianna Walcott at 1:28 PM