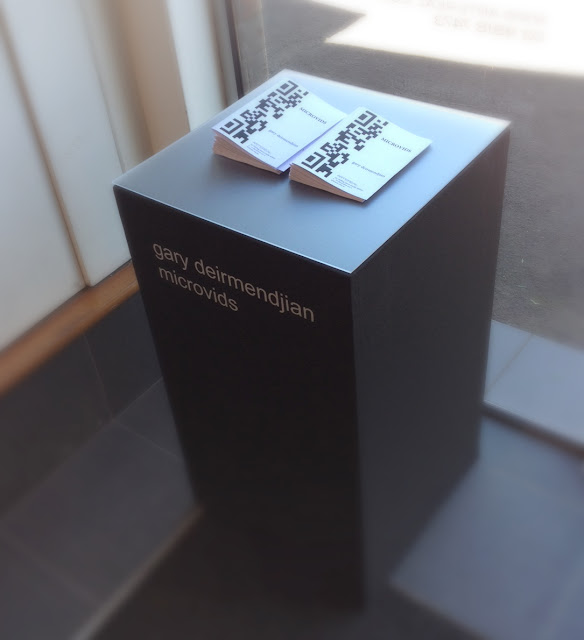 Gary Deirmendjian's current exhibition MICROVIDS, curated by Pedro de Almeida, challenges audiences to reconsider their understanding as to what constitutes an 'exhibition'.

Presented as a lone black plinth, positioned within the entry to Artereal Gallery and existing outside of the main gallery, the exhibition consists of a simple A5 catalogue placed on the aforementioned plinth. The catalogue itself contains a selection of eight QR codes* and an accompanying curatorial text. When scanned, each of these QR codes links back to a certain video on youtube.

Referred to by the artist as 'microvids' these video works exist outside of the traditional fixed physical space of the gallery and can be accessed at any time from any place...

This catalogue, available as a PDF on the gallery's website, and widely disseminated over the internet and via email, has the potential to become viral - allowing the 'exhibition' to continue to grow in reach and to live on past the set dates of the exhibition within the gallery proper.

In this way, the exhibition MICROVIDS questions existing definitions of 'the exhibition' suggesting instead that an exhibition can exist simultaneously, in many different forms, spread over time and space.

Can you tell us about this aspect of your artistic practice? When did you first being making these 'microvids' and how are they made?

I have over several years now been quietly developing an online depository on YouTube of what I call my MICROVIDS. The depository is manumente.

The MICROVIDS are very brief and discrete suggestive ends edited from a growing pool of raw footage, the capture of which are enticed only by the incidentals of real life encounter and experience, without premeditation or orchestration.

By virtue of this the mobile phone in the pocket has often presented itself as a handy footage (as well as still image and audio) capture device.

Here, if the raw footage may be seen as raw media, the MICROVIDS may then be appreciated as being small resolved works made by editing … in fact they’re typically found through the editing.

As a contemporary artist what is the intent behind these works?

Once made the MICROVIDS are released into the ocean of YouTube, where they drift freely to over time find their own audience, free of any obligation mediation or justification. They exist in the ether of the net as bits - for as long as the net or YouTube may be, unable to be trapped owned or sold in the physical world.

With MICROVIDS their primary intent has always been for direct internet experiencing where the viewer, whether ushered to them or discover incidentally, choose their own available device (desktop, smartphone, tablet or other), place and time of experience. Further each viewing may be regarded as a direct experience of the original artwork, as opposed to experiencing its reproduction communicated via another media – this is akin to the direct experience of a painting vs. a photograph of that painting.

To exhibit them within a gallery context trapped on USB or DVD via screen projection or monitor devices, would entirely defeat their purpose.

Where did the idea for exhibiting these 'MICROVIDS' via the use of QR codes come from? And what is it about presenting the works in this manner which appeals to you?

In the form of QR codes the current MICROVIDS exhibition at Artereal, has I believe, found a unique way of featuring them in a gallery space without compromising their purpose.

Pedro de Almeida, an arts writer and curator, was invited to curate the exhibition. He viewed the MICROVIDS at manumente to select a few as one would select works from an artist’s studio for a considered exhibition, and to provide its curatorial direction and accompanying text.

Here Pedro has excelled with a much appreciated development in which he responded individually to each of his selected MICROVIDS in a poetic, rather than a descriptive sense.

In the real world the exhibition space is a single sheet of A4 paper, printed on both sides and folded in the middle to form an A5 pamphlet. The QR codes serve as ever-ready springboards to the internet where the selection can be immediately summoned for play from and on the viewers own device.

Gary Deirmendjian is an artist whose practice encompasses sculpture, photography,video, installation and site-specific works. He has exhibited widely and has received numerous new work invitations and commissions for private and public artworks and site-specific projects. He trained as an aeronautical engineer becoming significantly active in defence research and development and then industrial design before commencing full-time artistic practice and undertaking a Master of Fine Arts in Sculpture from the National Art School Sydney.

*QR codes, abbreviated from quick response codes, is the trademark for a type of matrix barcode first designed in Japan by Toyota subsidiary Denso Wave in 1994 to track vehicles during the manufacturing process. Consisting of information that is encoded in a pattern of black modules arranged in a square on a white background users with a smartphone equipped with a reader application can scan the image of the QR code to display text contact information connect to a wireless network or open a web page in a browser. Source: wikipedia.org/wiki/qr_code.

This exhibition exists outside of the traditional gallery space via PDF version of this document which includes individual titles hyperlinked to the respective MICROVIDS. To view the PDF catalogue for this exhibition please click here.
Posted by Rhianna Walcott at 1:53 PM