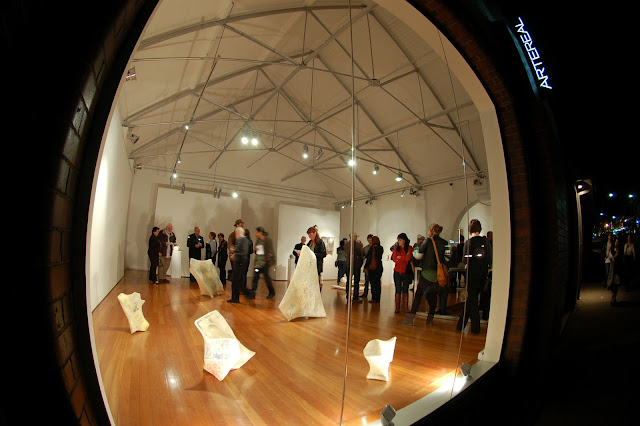 Artereal Gallery is excited to announce the formation of a new Curatorial Advisory Board for the gallery.

The board, which will work closely alongside the existing Artereal team on both the future direction of the gallery as well as exhibition programming and curatorial decisions, is comprised of three key founding board members: Lisa Corsi (Co-founder of SafARI and Managing Director of Artcell), Sebastian Goldspink (Founder and Director of Alaska Projects) and Francesca Valmorbida (previously of Artbank, the Biennale of Sydney and Sydney Contemporary Art Fair).

The Curatorial Advisory Board was envisioned by the gallery as a way to introduce multiple and disparate curatorial voices and visions into the gallery space whilst also challenging and expanding the traditional concept and role of the commercial gallery. Each of the board members has been carefully selected based on their talent and unique contribution to the local contemporary art scene – as well as for their diverse background, experience and areas of specialty. As part of their role with the gallery each board member will also be invited to curate one exhibition within the main gallery each year. The first of these exhibitions will be presented in the second half of 2013.

Originally established seven years ago as a space for contemporary art with a focus on exhibitions with significant international content and heavy curatorial influence, the gallery will continue to focus on presenting museum quality exhibitions which engage with experimental and cutting edge contemporary art practice. Although Artereal exists primarily as a commercial gallery, we do not fully fit within the context of the traditional model and our program also includes a blend of exhibitions which could be perhaps best categorised as typical of Artist Run Spaces (in that they are more experimental and ‘risky’) or Institutional spaces.

The concept for the Curatorial Advisory Board has slowly evolved as a result of the success of the Artereal Gallery Project Space, which was launched in early 2012. Introduced as a dedicated space for exhibiting cutting edge work by both emerging and established artists working across performance art, video, installation, sound based art and new media - the space has a particular focus on exhibiting work which is generally absent from or ignored in a commercial gallery context.

Following the addition of Matt Glenn to the Artereal team in the role of Project Space Curator, came an acknowledgement and an increased focus on the importance of including a wide variety of independent curatorial and industry voices - hence the development of the Curatorial Advisory Board.

Further to their involvement with the curatorial direction of the gallery, the board will also function as a ‘think tank’ aimed at helping the gallery to further stretch its vision and continue to develop and strengthen its voice within both the local and international contemporary art scene. With this exciting development comes the opportunity to introduce new voices, both curatorial and artistic to the gallery space.

Lisa Corsi is co-founder and Managing Director of ARTCELL, an independent agency which reflects her commitment to the development and recognition of art and its narrative. Established in 2007, Lisa has provided project support to artists and institutions, as well as curatorial and collection management support to address the changing landscape of private and corporate art collections. Lisa is also co-founder of SafARI, an exhibition of unrepresented artists in Sydney’s least visible venues, timed to coincide with the opening weeks of the Biennale of Sydney. Lisa was Curatorial and Collections Manager at Sherman Galleries, Sydney between 2000 and 2006 and has also worked with the Biennale of Sydney. She is currently President of SafARI Initiatives Inc. and board member of 4A Centre for Contemporary Asian Art.

Sebastian Goldspink is a Sydney based art professional working across a variety of roles. He is the Producer of Art Month Sydney and is the Director of ALASKA Projects, a multi disciplinary art space in Kings Cross. ALASKA Projects is committed to supporting emerging artists with an ambitious and varied exhibition and public program. Since opening in November 2011, ALASKA has staged over 30 exhibitions and has a dedicated music and performance program. Sebastian is currently involved in several independent curatorial projects including curating the 2013 John Fries Memorial Prize and as Art Bank's roving curator for 2013. He lectures in art writing at the College of Fine Arts, Sydney and sits on the advisory panel for the Supported Studios Network for Accessible Arts.

Francesca Valmorbida has extensive experience across all facets of the visual arts and has developed programs and curated exhibitions for leading organisations such as Sydney Contemporary, the Melbourne and Sydney Festivals, Biennale of Sydney, Dinosaur Designs, Kaldor Public Art Projects and Artbank. Over the past 20 years, she has worked with international and Australian artists on significant programs such as Marc Newson's lighting of the Sydney Opera House, major installations in Melbourne's CBD by Bill Henson, Barbara Kruger , Yasumasa Morimura, and Farrell and Parkin, commissions for the QVB by Choi Jeong Hwa, Lauren Berkovitz and Christopher Langton, and large-scale exhibitions by Annie Leibovitz, Richard Misrach, and American glass artist Dale Chihuly. Francesca has also directed her own object-based art gallery Pablo Fanque.

Posted by Rhianna Walcott at 1:50 PM