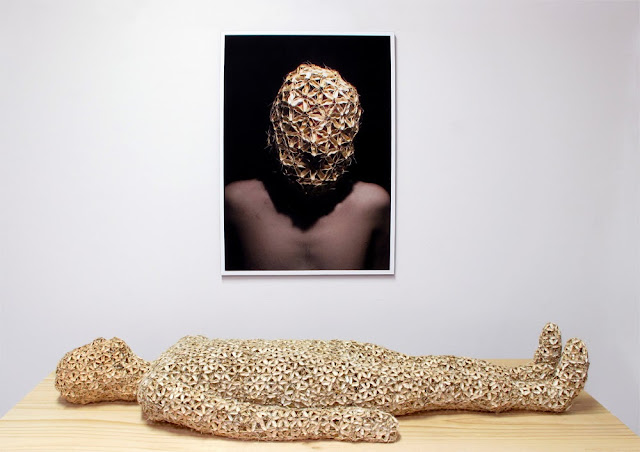 According to my parents I began drawing before I began talking and the majority of my communication as a child was done through creativity. At the age of nine I had already determined what I wanted to be when I ‘grow up’. Being an artist back then just meant that I could use my imagination and make things all day! So it seemed like a promising career choice. Over the years however my views on art have taken on a greater meaning and significance to my life. Art brings to me a deeper awareness, it has become a place where my interests and ideas can physically and mentally transform. I wanted to become, and am an artist today because I always felt that making sense of the world around us is much more exciting this way.

This photograph which exists also as part of an installation began with wanting to create a work that would be dedicated to my father. For as long as I can remember peanuts have been my father’s favourite. On special occasions or even for no occasion at all, peanuts have been a staple when choosing a gift. My father is a keen horticulture enthusiast and our family backyard in far north Queensland was a jungle of tropical flowers, fruits and veggies. It is no coincidence that the peanut (Arachis hypogaea) was the first plant that my father grew and successfully cultivated as a young boy growing up in Indonesia. After reflecting on the significance that the peanut has to my father and the image that my close family and I have of him, I began the process of collecting the shells left as remnants from his frequent ritual; of sitting in front of the television with his newspaper and packet of ‘Kacang Garuda’ (Garuda Peanuts).

During this time I was also researching traditional Chinese art forms and came across the jade burial suits used to house the deceased bodies of Chinese royals in ancient times. These suits were constructed from handcrafted jade tiles sewn together with precious metal threads; an indicator of the person’s wealth and status. I wanted to apply a similar form like that of the jade burial suits in my work, whilst also bearing in mind the disregard that my father has for the Chinese tradition of bringing ‘wealth’ in the afterlife. Because peanuts in the Western world are known to symbolise very little to no worth, I felt that the use of them in this work would parody the idea of opulence, functioning to represent my fathers ordinary lifestyle and appreciation for the simple pleasures in life.

Garuda peanuts go through a process of their own before being commercially packaged by Garuda Food. First they are a soaked in brine, boiled and then air dried outdoors. Soaking the peanuts in brine causes them to shrink and retain the majority of sodium chloride within the shell. This unique preparation method results in a shell that is preserved yet moisture retentive. To make use of these properties I decided to construct the work using needle and thread. The triangular arrangement combined with the flexibility of the sewing method transformed the rigid shells into a pliable fabric. Using this ‘fabric’ that was made to measure, I assembled the ‘mask’ (visible in the photograph) that also became the head component in the sculptural piece of my fathers body.

Because my parents are seventh generation Chinese born in Indonesia our connection to Chinese cultural traditions have diminished over time. The one connection that my father has chosen to maintain however is our family name ‘Oey’. Most Chinese descendants, including the majority of my family living in Indonesia during the 1960‘s were coerced to adopt Indonesian-sounding surnames as a result of anti-Chinese assimilation laws. My father is the only in my family to have changed back to his rightful name, an act that I believe was symbolic of his defiance and search for cultural dignity. The title of this work ‘黃 温 福 Oey Oen Hok - my father’ indicates the significance of my fathers name to his personal history and hybrid cultural self.

The symbol of the peanut shell in the context of this work can be interpreted as the ‘tough’ or ‘protective’ barrier that encloses the fruit within. By inverting the shells I want to expose the beauty within these objects individually but also illustrate a metaphor for my fathers private and recluse personality. The painstaking construction process that is made visible through the loose threads also represents a binary of the notions of strength and fragility; qualities that I have found to be at the heart of my fathers inner being. I look at this work as a manifestation of the stories my father has passed down to me and the memories we have shared with each other. The painstaking process became symbolic of my reciprocation for the commitment my father has shown to me as his only daughter.

I am currently working on the studio project for my Honours degree at Sydney College of the Arts. This work which will be included in the 2013 Undergraduate Degree Show will be an exploration into ‘commodity culture’ and bring forward the idea of marketing cultural stereotypes in film and media.

Posted by Rhianna Walcott at 3:16 PM