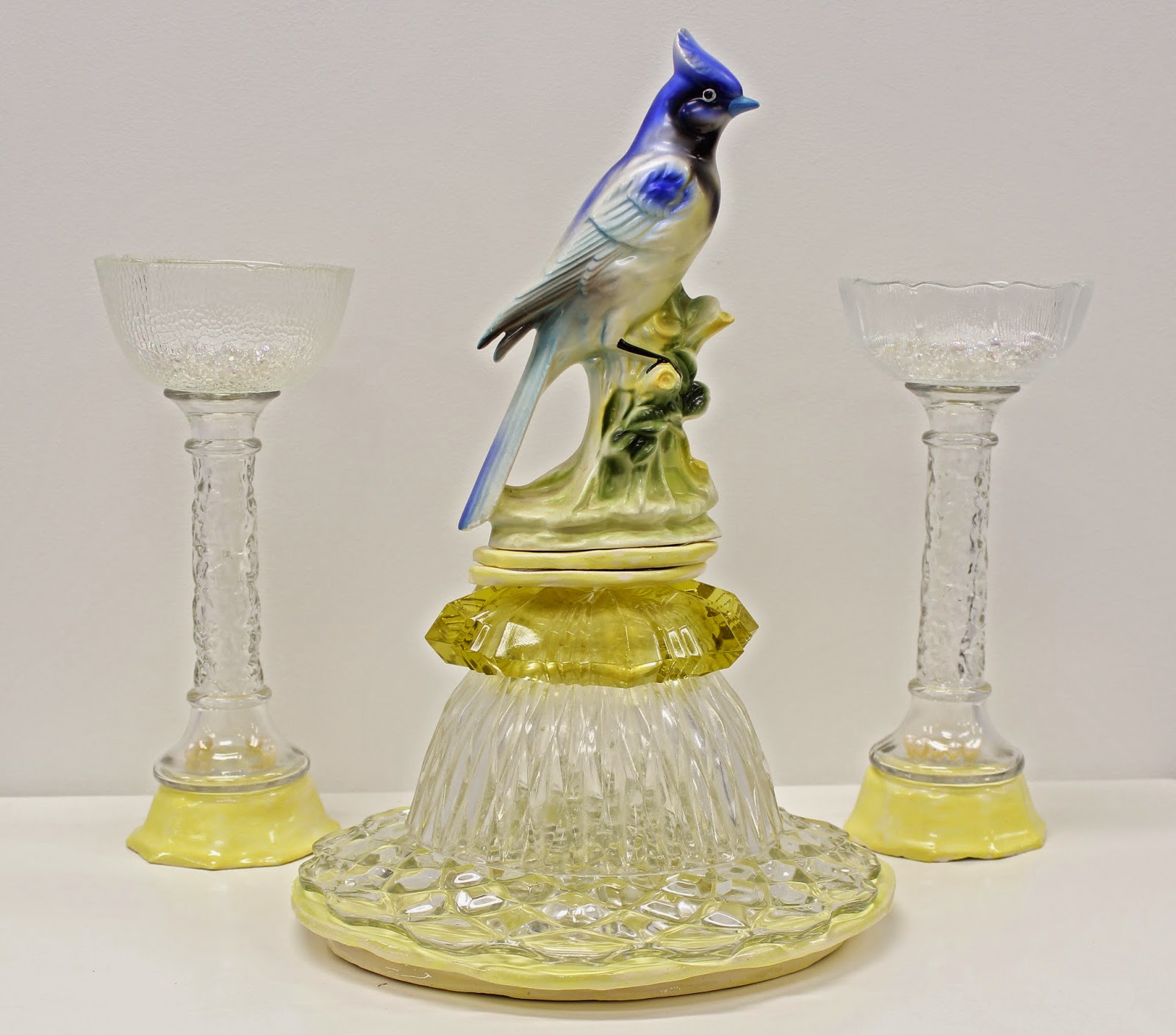 Image: Jodie Whalen, Blue Bird, 2014, glass (yellow & clear), clay (yellow slip, matt clear glaze), rainbow beads, pearls (fresh water), dimensions variable
Jodie Whalen last Saturday spoke with Andrea Huang for 2ser's 'So Hot Right Now' program about her solo exhibition Paradise, currently on display at Artereal Gallery. During the interview, Whalen enlightened us on some of the wonderful dualities that exist in her playful assemblages, her thoughts on the value system of aesthetics and how her background in performance has influenced her new artworks.
You can listen to the entire interview here and see below an excerpt of Whalen dissecting her assemblages, piece by piece.

Huang: With the use of pearls and crystals alongside the beautifully imperfect ceramic work you've created, it brings together many surfaces and textures. What does that interplay mean for you?
Whalen: "I have used freshwater pearls and then I have these plastic rainbow beads. The pearl is from nature. The way a pearl is produced is quite barbaric and so in terms of the materials, I feel the pearl should be treated as a precious item within the assemblages because a creature made them. And yet, the rainbow beads are just incredibly beautiful to look at. They're these incredibly fine, rainbow, pearlescent beads. And they have a similar magic to the pearl but, what creature would make those? The value of the pearl and the bead, for me, aesthetically, is the same. But in reality, their value is very different. That is the language that I'm speaking of within the value system in these assemblages. The glass was, at one point, bought for celebration, so it was quite possibly very expensive. Though as the years have gone by, it's fallen out of fashion and no longer has that value. So it ends up in an op shop and you end up with pieces rather than whole sets. So then, by nature, if the pieces are getting broken, they become more rare, more expensive, so you've got the duality there. Then there's my hand-made ceramic pieces that respond to the colours and forms of the glass, and then physically, to the shapes of the glass pieces. They're hand made and so they're considered 'objects of the artist's hand', so where does that value play within the assemblage?
Where do we attribute that value and what do we place value in? Is it conceptual value? is it the making? is it the magic? What is it?

And I hope that's what the viewer gets an essence of. I hope the assemblages and their materials allow the viewer to be transported somewhere."
Posted by Rhianna Walcott at 5:32 PM