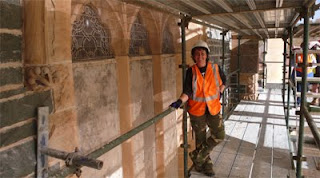 Nola Diamantopoulos has been awarded a prestigious commission!

A couple of weeks ago, after a lengthy application process, Nola was awarded The Goulburn Mosaic Commission at the historic old Cathedral of St. Peter & Paul’s.

This massive three paneled mosaic work commemorating the life of Caroline Chisholm will each be 300cm high & 72.5cm wide and made of smalti, presenting a great challenge for the not so tall Nola.

In case you aren’t sure what smalti is, it’s basically little mosaic tiles made by mixing molten glass with metal oxides for color; the result is a cloudy mixture that is poured into flat slabs that are cooled and broken into individual pieces. Smalti tile, sometimes referred to as Byzantine glass mosaic tile, are typically opaque glass tiles that were originally developed for use in mosaics created during the time of the Byzantine Empire.

So far, the commission has involved loads of research into the achievements and milestones of Caroline Chisholm who, according to Wikipedia… was a progressive 19th-century English humanitarian known mostly for her involvement with female immigrant welfare in Australia. She is commemorated in the Calendar of saints of the Church of England. There are proposals for the Catholic Church to also recognise her as a saint. (b. 30 May 1808 – d. 25 March 1877)
Nola finds the research side of this kind of project particularly exciting, like being an art detective, digging around for inspiration and knowledge to fuel the project from a historical and aesthetic angle, Nola is an avid creative investigator.

There will be significant involvement form the local community, and Nola has already had meetings with the Goulburn Church committee, local council and three schools to participate in the design of the mural, developing the style of the mosaic that is sympathetic to the architecture of the church as well as a harmonious palette and historical relevance.

Stay tuned for the progress shots on this great tribute to a great woman!
Posted by Artereal Gallery at 1:05 PM

Email ThisBlogThis!Share to TwitterShare to FacebookShare to Pinterest
Labels: Nola in Goulburn