Gary Deirmendjian in 'Sculpture by the Sea Aarhus - Denmark'... 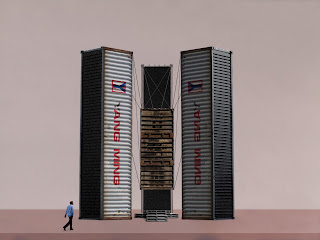 Gary Deirmendjian_ consumer temple – aarhus_2011
Coinciding with his solo exhibition Skin to be held this May at Artereal Gallery, Gary Deirmendjian has been selected to exhibit in Sculpture by the Sea, Aarhus – Denmark, from the 2nd June – 3rd July 2011 as one of six Special Invited Artists constructing very large scale works or installations for the exhibition. Under the patronage of Crown Prince Frederik and Crown Princess Mary of Denmark, Sculpture by the Sea Aarhus – Denmark will include more than sixty sculptures from all over the world which will be exhibited along the City of Aarhus scenic coastal walk.
Gary Deirmendjian’s project consumer temple – aarhus, a towering twelve meter high installation will be situated as the focus of “container city”, a town square built from modified shipping containers housing Sculpture by the Sea’s key infrastructure including restaurants, cafes and educational facilities.
Gary Deirmendjian describes the ideas behind 'consumer temple – aarhus':

“Standing in a state of stable decay, the work suggests an architectural proposition. Its central chamber, suspended above the raised platform, hangs stitched to three giant pillars by way of a network of cables.

When standing upon the platform, one’s gaze is drawn up into the airy chamber high above, where light beams through small broken coloured windows onto a shopping trolley, fixed against the opposing wall. It rests beaten, twisted and burnt.


The horizontal beam suspended near centrally and somewhat lower than the trolley, is a major clue as to the chamber’s more audible purpose. When drawn by its handling rope and allowed to swing back and strike, the chamber generates a significant gong.

While the architecture may hint at a house of worship from a forgotten time, its deity and practices, may however feel oddly familiar. Clearly abandoned, the faith that has brought this house into being is no longer dispensed here.” – Gary Deirmendjian, 2011
﻿Sculpture by the Sea - Aarhus is a formed body comprising of the ARoS Kunstmuseum (http://www.aros.dk/), City of Aarhus and several other patrons including the Danish Royal Family.
Posted by Rhianna Walcott at 12:12 PM

Email ThisBlogThis!Share to TwitterShare to FacebookShare to Pinterest
Labels: exhibition, Gary Deirmendjian, Sculpture by the Sea