Can you explain the conceptual process behind your work?
There is no one concept or process …
The best way I can describe it is that I feel as though I’m at some arrived at inner plateau. From here works are somehow sparked out, in response to real world encounter and often when I least expect it - a sort of lightning field in reverse. It’s central felt thought that drives my work really, not an adherence to particular concepts. Thought relating to life, us and our condition as living beings, that through questioning has managed to gain momentum and density over the years.
That thinking or understanding sees itself constantly hinted at, or indicated, in the everyday world that I wander through. At times ideas form about how this may be suggested back to the world - to others. Those ideas that are vital enough survive and grow in intensity over time, and eventually drive me towards a cyclone of tireless physical activity - doing, testing and making. During such periods I feel as though I’ve become an instrument of something else.
The work may seem different on the surface, but its always attempting to suggest the same thing. That, we are of the same kind, we are very small, we are largely lead and that life is limited, precarious and incidental - in other words existence is fragile and out of our hands.
What are your key influences as an artist?
The truth.
At the sensory end I’m excited when I feel truth in the world and in others. At the other end the payoff is in the momentary feelings of satisfaction when I feel it in the suggestive cloud of my own makings.
As far as whose works have influenced my thinking and work along the way, it ranges from anonymous carvings of ancient times, to Michelangelo’s unfinished “Blockhead Slave” (largely because it is unfinished), to Richard Serra’s splashed molten lead works and “Prop” - the most meaningful work that I’ve experienced in person. 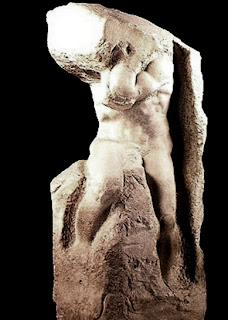 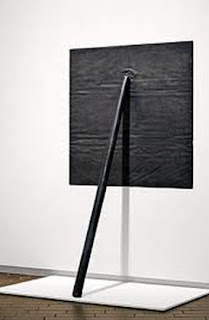 The rest come from the world of words, from the “outsiders”. From Blake, Nietzsche, Kafka, Camus and Beckett, to name a few. Leonard Cohen showed me that the means of pop culture are a valid medium through which to “reach out” with one’s own art/poetry. After all that is how his words crept up on me - when I needed them most. This audience is the least suspecting and hence the most rewarding to get hooks into.
The work “again born” in skin, has an alternate title that I feel sums things up:
“thank you Beckett and other friends - you did not warn that the seeing would bare much pain” 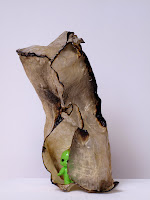 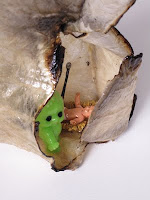 Gary Deirmendjian_again born_2011_mixed media_23 x 15 x 12cm
What is it that you are trying to achieve with the works in this exhibition?
Generally speaking the central question with me is always how much of our thoughts and attitudes are based on our own arrivals and how much has one been conditioned to carry? I believe that unless you question, you’re caught up and are blindly following a way of being within some castle in the sky. A detached place where things are packaged neatly with “black and white” compartments of rights and wrongs, goods and bads, with exclusive hierarchy propped up by pomp and ceremony, and preachings of “them and us”. Difference is a social construct that in time masks, with an ever-thickening shell, the truth of our overwhelming sameness. Truth has weight and obeys gravity I find. I KNOW for instance that the homeless fallen lying on the ground, who I wander past during the night, are not lying to me.
In “skin” I’ve tried to give form to the notion of conditioning, which like the wind is a force felt yet unseen. I’ve tried to limit the references to the context of our time and place and way of being. This, knowing full well that ways of being come and go, but our behavior towards one another remains unchanged. I’ve made the statement elsewhere that “… democratic lands of plenty have their victims too.”
Some time ago, I came across a spider in the act of frantically mummifying a live moth - much larger than itself. It produced endless silk - it seemed - in sheets and expertly wrapped the dazed moth while turning it rapidly between its feet. The moth appeared cling wrapped in the end.
This vision gelled as an appropriate metaphor for how the individual is conditioned to the expectations of society - of whatever time and place. From the second the eyes open, the cataract of conditioning is mediated to take hold. I guess here - and always - I’m trying to suggest just that.
What is it that you want audiences to take away from your work?
A small piece of themself …
﻿Gary Deirmendjian's exhibition 'skin' can be seen at Artereal Gallery until 28 May 2011.
Posted by Rhianna Walcott at 1:36 PM