Interview with Helen Vivian, Curator of Palimpsest #8: Collaborators and Saboteurs...
In 2010 Ken + Julia Yonetani completed a Synapse art-science residency awarded by the Australian Network for Art & Technology (ANAT) which resulted in a three month collaboration on location in Mildura, with scientists at the Murray Darling Freshwater Research Centre and Sunrise 21. Still life: The Food Bowl is the resulting body of work. It is made entirely from groundwater salt that as part of salt interception schemes has been pumped out of the ground around the Murray-Darling in an effort to try and reduce salinity in the river system. Versions of this work will also be shown at: Mildura Palimpsest #8: Collaborators and Saboteurs, 9-11 September, 2011 and GV Art, London, 6 October - 22 November 2011. 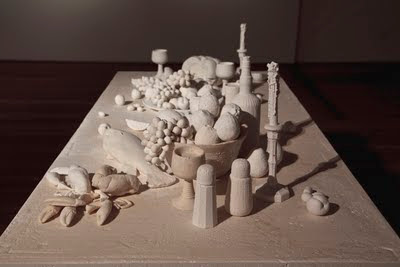 How did you first discover Ken + Julia Yonetani’s work and what drew you to their practice and prompted you to invite them to participate in Palimpsest #8?
I discovered their work in Venice 2009 and was immediately struck by their use of sugar to make a work of great beauty with a powerful environmental theme. My first thought was to send them some salt from Mildura to see if they might be interested in working with it for Palimpsest #8. When I spotted the Synapse grant I saw how we could resource such an ambitious project and provide an opportunity for the artists to spend three months living in Mildura and working with scientists and mappers with an intimate knowledge of the environment. I am very grateful that Ken and Julia and their beautiful girls, took up this challenge.
The curatorial premise of this year’s Palimpsest is Collaborators and Saboteurs, how do you see Ken + Julia’s work in relation to these concepts?
We are all collaborators and saboteurs in the created worlds we inhabit. The way we think about the world, our political and spiritual beliefs, as well as our customs and behaviours, impact on the world. Ken and Julia have created a work which expresses the complexity of all these interactions between the cultural and natural world so beautifully it is breathtaking. During Palimpsest #8, Sept 9-11, the work will be sited in the original homestead of the Chaffey Brothers who brought irrigation to Mildura. It’s a grand Victorian mansion, which expresses, in its ornate architecture, the great vision of irrigating the desert to create a food bowl. Food is so important, but also the land which produces it, and the land which the Chaffey Brothers built their dream upon contains millennia of history both cultural and natural. Rio Vista was built on a midden on land that has been inundated by the sea three times. That history is ingrained in the soil, creating a Palimpsest rich in symbolic and physical memory.
It must have been very interesting seeing this body of work develop first hand from the early days of Ken + Julia Yonetani’s residency in Mildura (working with scientists at the Murray Darling Freshwater Research Centre and Sunrise 21). Looking at the finished body of work, Still Life: The Food Bowl, are you surprised by the direction that the work has taken?
There were a number of ideas that developed during the residency including an ephemeral work which was to be sited in a salt affected billabong. In the end it was impractical to build that work because of the floods. I am glad that all their energies were able to be directed into this work as it has a monumentality and grandeur which is entirely fitting to the scale and intricacy of the environmental and cultural challenges facing sustainable food production in the Mildura region and the world.
As both the curator of Palimpsest #8 and a local resident of Mildura, what are your thoughts on the way in which the artist’s have engaged with the environmental issues facing your community?
The artists have created a work which will engage a wide audience and which communicates clearly but subtly the predicament of sustaining communities in a fragile economic and natural environment. The beauty of the work reflects elements of the vision required to develop regions like ours and to produce food for the world. At the same time the extreme fragility of the work alerts us to the sensitivity required to sustain life here. The complexity of these issues is so much more evident in a region like Mildura than in the metropolis where nature is clothed with asphalt and cement and culture too often gets mistaken for entertainment rather than ‘the beliefs, customs, practices, and social behaviour of a particular nation or people.’ Horti-culture is the foundation of this region’s economy, and people engaged daily in working these soils are deeply aware of their dependence on cultural attitudes in the city, almost as much as global markets and climate. These things can often seem divisive but there is only one world, which is a key theme of many of the fifty works to be shown in Palimpsest #8. Ken and Julia have responded with intelligence and passion to these issues and the work they have created, Still Life: The food bowl, is an extraordinary gift to this community and to the world.

Posted by Rhianna Walcott at 1:53 PM