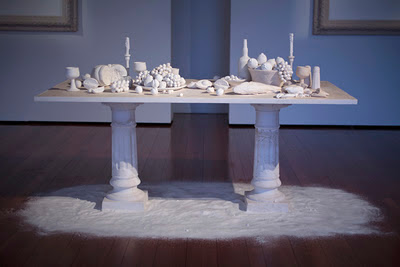 Ken + Julia Yonetani are currently included in 2112 Imagining the Future, a curated group exhibition at RMIT Gallery in Melbourne. The exhibition which runs until 28 January, 2012 taps "into general anxieties about an uncertain future and public concern about the consequences of climate change, 2112 Imagining the Future presents a range of images revealing how contemporary artists imagine the world might look in one hundred years’ time.
The exhibition responds to recent artworks that gravitate towards the realm of science fiction, a genre that explores ideas about the future and is highly developed in literature and film, but has hitherto been regarded as fairly marginal in the visual arts.
By resisting predictions of inevitable global disaster, or nuclear winters, the artworks explore the idea that although the unintended consequences of human actions have already begun to shape our future, the future is not fixed and is a domain that can shift and change according to human vision and consensus.
2112 Imagining the Future features works in a variety of media, exploring largely dystopian and occasionally utopian glimpses of a future world." Dr Linda Williams, curator
Artists include:  Philip Brophy, Justine Cooper, Keith Cottingham, Thomas Doyle, Lesley Duxbury, Kellyann Geurts, Stephen Haley, Kirsten Johannsen, Sam Leach, Tony Lloyd, Yves Marchand and Romain Meffre, Mariko Mori, Hisaharu Motoda, Lyndal Osborne, Patricia Piccinini, Philip Samartzis, Roman Signer, Superflex, Debbie Symons, Stephanie Valentin, Darren Wardle, Kenji Yanobe , Ken + Julia Yonetani.

To see a sneak peak of some of the work from this exhibition click on the below video...
Posted by Rhianna Walcott at 2:28 PM