DISSOLVE: 'WAYS OF SEEING' AND 'WAYS OF BEING'

Annamarie Dzendrowskyj kindly takes us behind the scenes of her practice and gives us a sneak peak into the making of her latest series of work... 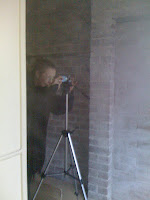 Photo taken at National Art School 2011
My work is driven by a love of experiencing and exploring life. My previous job as a scuba diving instructor provided a first-hand experience of the submline- awe/terror and void in relation to nature. The underwater world is in constant flux. Everything you see is affected by movement, light and weather conditions, nothing is clearly defined. This previous experience has literally influenced how I approach painting, which intuitively results in work that reflects 'on land’ years of seeing what appears as dissolved forms underwater.
The work presented in the exhibition Dissolve at Aretreal Gallery (February 2012) was derived from my experiences of the Hospiz residency in the Austrian Alps in Feburary/March 2011. The residency offered conditions from sunshine to whiteout ,and also the opportunity to observe the unexpected.
The following photos were views from my window in the Austrian Alps. The photo bottom right was after 5 days of solid snow and the window was literally “snowed in”. 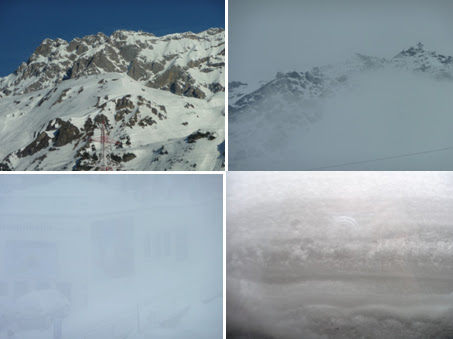 The unexpected took the form of a drive to Bregenz, about 2hrs from the Alps. A natural phenomenon occurs by the Bordense (Lake Constance) during winter where the town is situated. A fog hovers over any clear areas, so dense that it obscures vision. Bregenz itself is relatively clear as a town, but when you get to the lake, all visual perspective is destroyed.
The road to Bregenz, taken from moving vehicle. Austria Feb/March2011

View overlooking the Bordense (Lake Constance) from the town of Bregenz, Austria, Feb 2011

My process in developing work from these experiences, began with reviewing photograhphs. I view the act of taking a photograph as being equivalent to a sketch, a method to capture a fleeting moment, photos through the window of a moving vehicle, of rapidly changing weather. The selection of photos to consider when making work were not based on a specific narrative, although the selection might be described as filmic in the sense that I aim to select photos that relate to each other through tone/colour/presence/absence of form.
There are challenges with this process as a starting point. For example, to achieve a blurred movement from inside a vehicle, the type of vehicle and speed will affect the outcome. If a photo is being taken through a window affected by condensation, the amount of condensation present may be either too much or too little. The weather itself is crucial. To obtain bad/stormy/hazy weather, means being in the right place at the right time, which isn’t always possible. Notions of chance therefore play a large part in securing a workable starting point. The lack of control in the resulting photograph is appealing, and exciting, I never really know what to expect.
The next step I took was to sketch on drafting film from memory and photos whilst in Austria . Once back in Australia, I worked from the developed photos with the knowledge that I was now back in the land of vast blue skies and sunshine and wishing for the experience of the grey and non-descript. So memory and emotion comes into play.


The work then takes a rather considered approach to begin with. I may or may not adjust the lighting/colour in photoshop, this is more appropriate to the twilight series, which are actually daylight images shifted in photoshop. 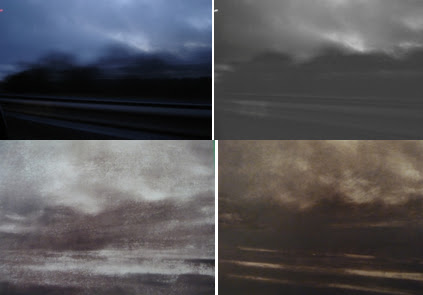 Twilight M25 I painting in progress                                                        Twilight M25 I final result
The following applies to all work:
Draw in watercolour pencil...why? Drawing an image to begin with provides the ground for me. The imagery remains. I begin with the photograph. it is what is there (not saying it is real..thats another argument), just that is what is in front of me of. But what takes it away from a direct copy of a photograph, is to consider the painting as a shift from, an emergence of the image, that is then destroyed, brought back and then destroyed again and after many attempts at this process, finally realised. What is this process? Its an attempt at realising the images as it was as experienced...fleeting tho that may be. Hence the many attempts at removal/re-draw /remove/paint over, layer after layer. This then becomes the reason why I work with such thin layers of paint-almost nothing at times. Less becomes more...the less paint I use, the easier it is to remove, and re draw/re-paint, till the work reaches a point where it might be considered resolved.

Since completing my degree at National Art School last November 2011, I’ve lost access to a studio space and been working at home. The floor and kitchen bench tops have become my work area. But as my process is inspired by exploring life experiences, these are of the prime importance, not where I produce the resulting work. I’m looking forward to my next adventure.....