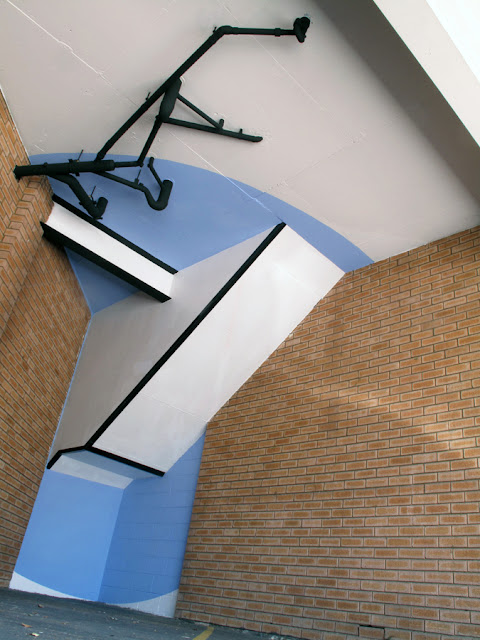 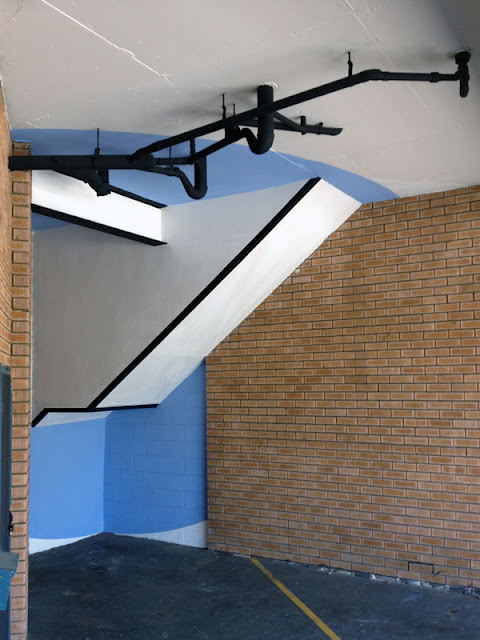 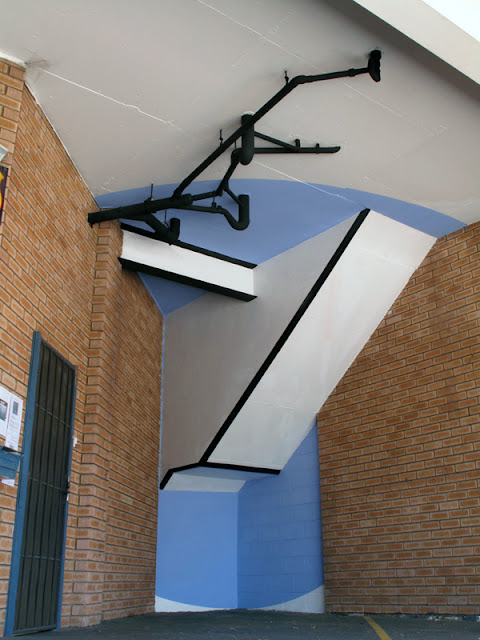 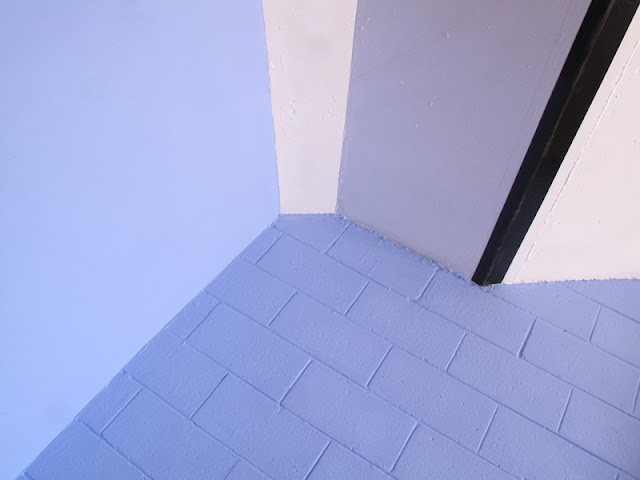 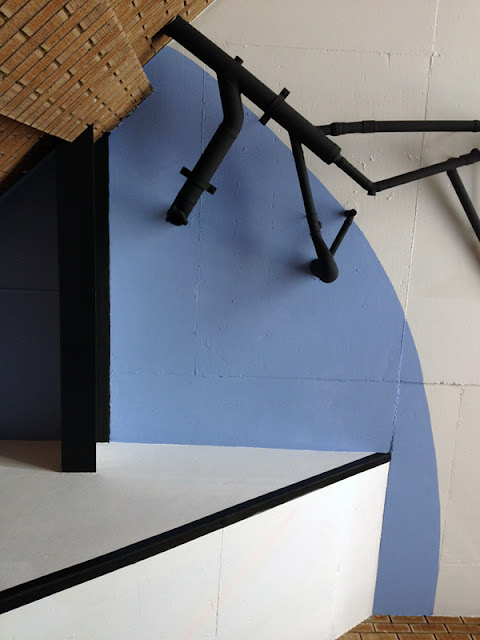 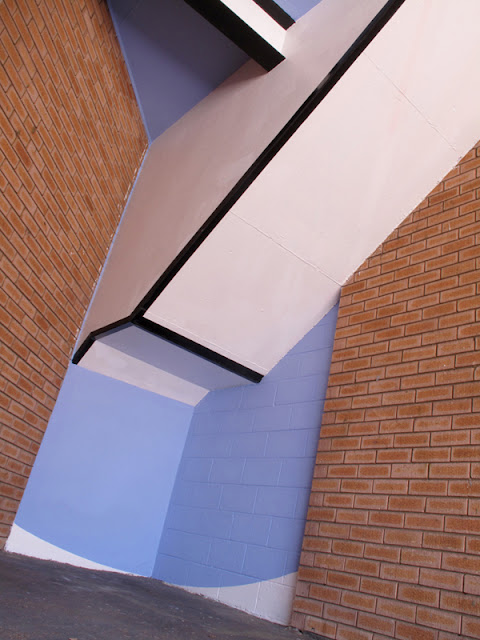 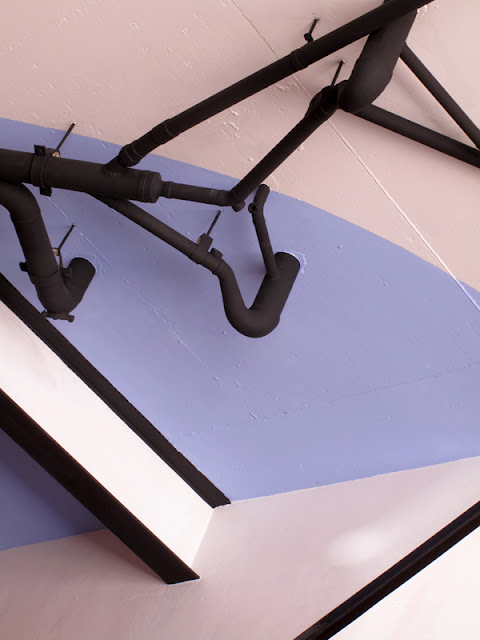 Gary Deirmendjian was recently invited to created an outdoor site specific intervention at Factory 49 as part of their exhibition program. (See previous post on this work here.)

Since that time Gary has collaborated with long time friend and UK based Australian artist John Adair to further develop this existing work. With John having never been to Factory 49 in person, his involvement in the planning and realisation of this new work (entitled 22.2) was completely dependent on virtual and screen based technologies and the internet (he was 'present' at the exhibition opening via Skype on a mobile phone).


Below John discusses the inspiration and process behind this collaboration...

“with regard too a direct or exact opposite”

To be fashionably contemporary I might suggest an explanatory title to name the eventuating work…“Function of the Corner Void” or “the unbearable consequence of objects in the face of images”. This would clearly explain, at least my thoughts on, what is being visually dialogued through this project. If corners can be a kind of void for perceptual possibilities then this corner provides a very interesting challenge to any who choose to embrace it. In Gary and I’s case it has allowed us the added opportunity to meet again, and yet for the first time, to aesthetically collaborate.

This collaboration might be viewed as a clash between a “sculptor” and a “painter”. But lets please refrain from such archaic hubristic terms, as they don’t really describe the function these two artists intend. I dare say, Gary rarely ‘sculpts’ now days and I rarely* ‘paint’. But my abiding interest does remain in 2-dimensional image divulgement and his in 3-dimensional object arrangement; and I think we would both agree that the mediums and manner enlisted by either of us differ constantly and are more subject to the site or idea than to our supposed craft.

Moreover, isn’t the enacting of a visual work too better explain an idea or a perception? One then supposes that this might be more clearly read without the support of a narrative. Why…because the reason you make something without words is to explain something you could not otherwise explain.

The relationship Gary and I have, has pretty much formed on this notion of ‘object maker & picture maker’, that is to say we met at art school where these things are vaguely qualified. Consequently, we are overly conscious of our respective positions in how/when we communicate. I can now see this work as somewhat emblematic of this relationship…an extended play between image and object…this too is now critically heightened by the use of the internet. As we now live on opposing sides of the globe, there is an awareness of our selves in space communicating with the other via a 2-dimensional screen image. We are familiar with each other in real life but haven’t communicated that way for a couple years now. So it is not without thought that the work would not only be seen in situ but perhaps by many more others, as an image, a documented memory. It is a work that arguably aims to demonstrate the object presence of the corner in the face of 2d viewing.

From what I could see, as I could only view pictures, Gary’s initial work highlights the heightened points of the 3 objects that surround the corner, with black. The object of the linear plumbing hung free of the surface is painted black. The staircase protrusion on the other hand is not painted black, is this because it is still viably an extension of the wall surface, thus questioning its objectivity? Gary’s resolve
appears to me to be to highlight only the three protruding edges of the questionable object, in the same manner or thickness of the pipes. This appears to be affirmed by the I-beam highlights, the ends being of similar thickness. What I see is that Gary has highlighted the 3 key forms that make up this most peculiar gallery space. I am not so sure that any of the prior twenty-one corner interventions at Factory 49 have caused these 3 objects, collectively, to stand clear as significant intrusions to this buildings corner. His pointed avoidance of the surface (ceiling and walls) intrigued me. Much of the Factory 49 wall work in the past has dealt with spatial issues more critically as imagists might perceive them dealing with the surface as an object or the object as surface. Gary seems more interested in the objects themselves…the pipes, the staircase protrusion, the I-beam…which in turn when I recognised this, allowed me room to intervene.

My intervention is a simple proposition that conversely utilizes an imagist approach; that of my premised placement of a 2 dimensional monochrome over the 3 primary architected surfaces of the corner walls and ceiling.

An underlying dot and a particular colour has a multifarious meaning for me. More crucially, in the end it is a singular mark/image that clearly rests on the surface, albeit somewhat aggressively obfuscated by the aforementioned objects. Not only those that Gary has highlighted but the raised flush of naked brick also interfere with the prime surface. Making this particular mark/image/dot very difficult to view or interpret.

A collision of physical and visual events is one way of seeing this… Assemblage is another… Yet for me it is as a marriage of opposites…image with object, un-solicited DIY modernity with un-solicited architectural heritage, re-pat with immigrant, here with there, formless with form, circle with square, 2d with 3d…image and object become metaphor for ‘colour and space’. Subjectifying the tyrannies that distance and difference often trigger into an objectivized form.

If you care to look a bit deeper, and you are familiar/know Gary’s or my work independently you may also notice a gravitation on both sides to our arguable more emotive long standing formal interests…Gary’s perennial dealing with larger than life quasi cubic form and the conversely similar, form-less sky space interest of mine. The accidental accent of the work, and impetus on the viewer, is to look up. Something we are probably both happy with for entirely different reasons…and perhaps not so different.

As far as the building is concerned nothing formally has changed, its object functions have not been affected. It is just colour, its absence and its determined perimeters that cause us to read an already fixed juxtaposition of form in a new or revealing way. As far as I am concerned it is all 2d. As my part of the work was developed far beyond the site behind/in front of a screen. I will never see the work in 3d and as far as the building is concerned I am two dimensional…Gary on the other hand will not only see it he has made it, because, he is three dimensional.

If Gary’s commitment to the object is made clearer by my image, then my commitment to the image is clearer for Gary’s object articulation. The building of course remains unchanged and proud in its demonstrative attempt to maintain site construction corner issues…the question for me is…did we manage to arrest and bring clarity to these randomly evident forms.

Posted by Rhianna Walcott at 5:41 PM