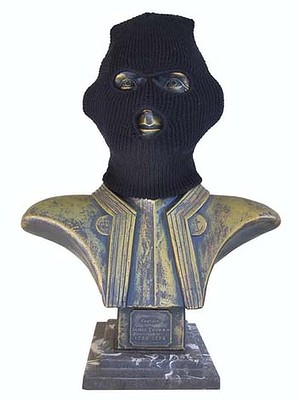 Congratulations to Jason Wing whose work Australia was Stolen by Armed Robbery is a finalist in the 2012 Parliament of NSW Aboriginal Art Prize. The finalist works will be displayed in Parliament until November 4, the winner being announced on October 17.

It's no surprise to find a bust of Captain James Cook gracing the halls of the NSW Parliament. But Jason Wing's artwork does not treat the English explorer credited with being the first European to land on Australia's east coast with reverence.

Wing's 'Australia was Stolen by Armed Robbery' features a bust of Captain Cook wearing a black balaclava, pictured. ''Australia was stolen from the Aboriginal people by lethal force,'' he said.

Wing added the fate of indigenous people had deteriorated since the arrival of the First Fleet in 1788. ''Racism and criminal behaviour by the Australian government is alive and well."

Extract from article by Andrew Taylor in the Sydney Morning Herald, October 4, 2012.

Jason Wing's work can also be seen in the Artereal Gallery stockroom.

Posted by Rhianna Walcott at 11:14 AM