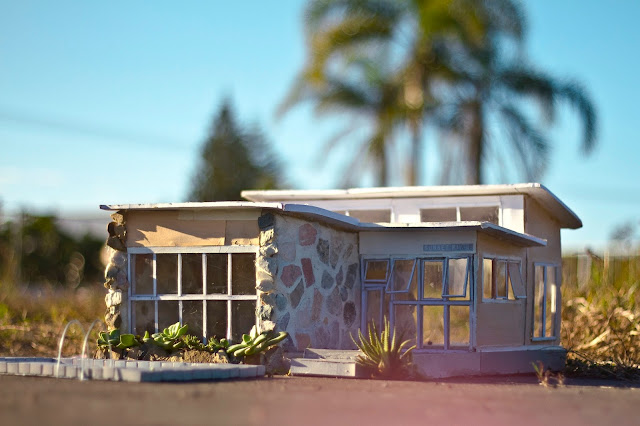 I didn’t always know I wanted to become an artist. I was always creative and interested in art, so I enrolled in a Bachelor of Digital Media to explore different creative areas. When I enrolled I was originally interested in arts administration and design. I really enjoyed making art but I was not totally confident in pursuing a career as an artist. At my university graduating exhibition my graduating body of work was acquired by the Gold Coast City Art Gallery and my art lecturer said to me “you know what this means, you have to be an artist now”. That was the moment I decided to become an artist.

I interweave model making, film and photography to create fictional spaces, to explore the illusions of unconventional contemporary spatial experiences. I start with a memory of a space usually focusing on a certain architectural element. For example with Sunset Place I started with a memory of a stone wall, the work then evolves organically as my memory and imagination grows. I leave all the changes of my model making process, as aresult the models are fragmented. The next stage of the process is photographing the space. In my recent body of work I photographed the spacewithin the urban landscape. After I capture the photograph the models are destroyed which means that the photograph captures a process in my practice.

Initially I was drawn to the familiar disappearing houses around me. The houses that I grew up with, that hold many memories were being demolished quicker than I could count. However now I have become deeply fascinated by the rapid development and what these new postmodern spatial experiences mean and say about the culture of a place.

What is it that you want audiences to take away from your work?

I aim to create an illusion of space similar to the spatial experiences we encounter in rapid changing postmodern cities. The spaces in my artworks are hard to define which hopefully creates an imaginative space for the viewer, allowing people to reflect on their own sense of place and experiences.

Tell us about one highlight from your career so far…

It is so hard to pick one, The publication of my work that QCP organized is amazing. It was also such an honor to be part of Photo LA and the Josephine Ulrick and Win Schubert Photography Award.

I will have a solo show at Artereal Gallery in May 2014. I am currently living in Los Angeles and making work based on my experiences of the Gold Coast, Los Angeles and Las Vegas. I have chosen these places as my fascination with the transient urban environment has opened up an interest into these postmodern cities that share the similar characteristics.

Posted by Rhianna Walcott at 10:25 AM