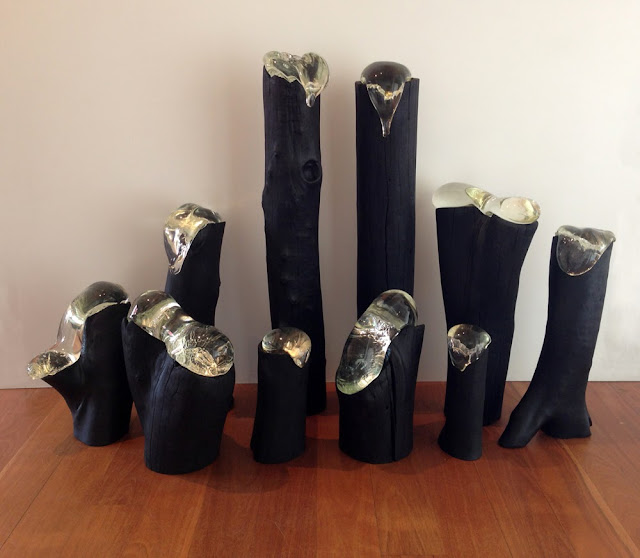 I don’t think there was ever a time where I consciously decided to become an artist – being creative was just something that I was instinctively drawn too. When I started working with hot glass twenty years ago – I knew I had found my passion.

My work, slumps thick- shaped biomorphic molten glass over and inside a series of charred, truncated wood forms. The hot glass itself assumes and picks up an imprint memory of the wood grain, is separated, and then when cooled is laid back down over the standing forms.

What led me to burning into wood with molten glass initially was this fascination I had with sap, which I had been collecting for a while. I was intrigued by how it oozed out of the cuts/lesions in trees, by its amber colour and how it solidified much like molten glass. I collected a lot and did a many experiments with it. I am a very curious person and like to explore what a material can do and where it can go... this then led me to pouring hot glass onto wood.

My current work is more about an emotional state than a concept- more a feeling, a sensation, as Louise Bourgeois says “It is not an image I am seeking. It’s not an idea. It’s an emotion you want to recreate, an emotion of wanting, of giving, and of destroying”. This statement captures what I want to do in my work that deals with the maelstrom of lifelong push-me-pull you emotions of relationships and the fundamental themes of longing, vulnerability, love and death. The female body is central to these inquiries. Inside of that is the possibility of transformation and how seemingly fixed states of being can in fact change given the right conditions- which is embodied by the materiality of molten glass and charred wood.

What are your key influences as an artist?

Eva Hesse and Louise Bourgeois are influential to my work in that both artists work with similar themes of the body, emotion, personal memory, death and absence and the on-going negotiations between internal and external realities. Hesse’s ideas of how to convey human substance through droopy, imperfect, discarded cast-offs has a raw, tactile, immediate quality that I am looking for in my own work. Likewise, Bourgeois with her ambiguous, biomorphic and sexually suggestive forms also have that direct, evocative, raw, potent quality that inspires me.

What is it that you want audiences to take away from your work?

I hope that people viewing my work get a sense of the body, an oozing of emotion, movement and dynamic relationships between the works.

I will be exhibiting next in Hunting and Gathering at Cessnock Regional Art Gallery from 16th November – 8th December 2013 and then preparing for a solo show at Artereal in August 2014.

My next body of work is based on an exploration into my Samoan heritage, focusing on the traditional practice of tatau/malu (male and female tattoo). I investigate how these ancient rituals embody culture in a traditional sense and in particular how the crossover of those meanings and symbols can act as a vehicle for contemporary subjective expression in a western urban context. Specifically I focus on ideas such as belonging, protection, suffering, and resilience and on-going negotiations between internal and external realities that in essence help to create both individual and collective identities.
Posted by Rhianna Walcott at 1:16 PM