“There are many things we could have said, but words never wanted to name them.”
(John O’Donohue, ‘To Bless the Space Between Us’) 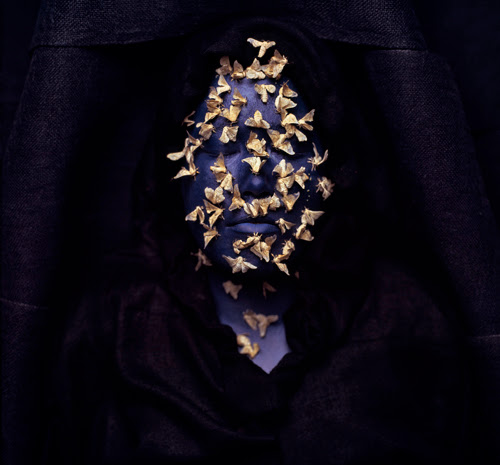 Shoufay Derz_ I am death, destroyer of words_2011

You are brought into a different world:  a pile of salt in a darkened space; a skeletal timber vessel; or the hypnotic rhythm of a gently rocking boat on a vast empty ocean, containing two people speaking, apparently at cross purposes. A glowing blue glass sarcophagus with beautiful, flowing script inscribed on its side, lit by solar panels. Silk moths flutter across the mouth and eyelids of a blue painted face, a pregnant woman walks slowly in the desert, trailing behind her yards of indigo dyed cloth. The works of Shoufay Derz transport us to a place quite removed from the banalities of daily life. She scrutinises the encounters and occurrences which make up the everyday to search for the deeper meanings buried deep within them.  From Sufi poet Rumi to Rainer Maria Rilke, from Samuel Beckett to Christian, Buddhist and Daoist texts, her work has at its heart her eclectic interest in writers, mystics, philosophers and artists who, like herself, are fascinated by the way that language and memory shapes us, while at the same time being always insufficient, inadequate. Evoking presence and absence, silence and speech, stillness and journeying, her works are deceptively simple. It is a simplicity born of their very long gestational passage into the world.

Derz thinks deeply, and works such as ‘Depart Without Return’ reveal this thoughtfulness in every aspect. This particular work began, she says, with an image that kept recurring in her imagination, of a woman in a desert – the Taklamakan Desert in northern China, part of the Silk Road. The very name ‘Taklamakan’ is often translated as ‘Point of No Return’. She discovered, however, that in Buddhist thought the empty desert is not considered a void; rather it is pregnant with possibility. For the artist this notion of the desert became an important element in her developing visual language of love and loss. For this particular work, which came over the course of its creation to be imbued with an ever greater sense of mourning due to events in the artist’s life, she has created an installation consisting of numerous connecting elements – still and moving images, panels of glass, pure indigo pigment and the life cycles of silk moths.

As the work began to take shape, Derz investigated the symbolic aspects of indigo – how it is made, what it has meant in different cultural contexts, the significance of the colour – and then the production of silk from silkworms, and all its possible connotations. Like the silk filaments teased from the cocoon in this ancient process, Derz’s work is a continuing thread which emerges slowly, over time. Her work is deeply intuitive, yet also painstakingly researched and considered, to the point of making her own indigo, raising her own silkworms, and learning how to spin silk. Nothing in her work is superficial, nothing is accidental.

There are many contemporary works in which the artist’s choice of physical ‘matter’ contains within it their intended meanings. Dinh Q. Le’s ‘Erasure’ and his installation of the remains of an old timber fishing boat, listing to one side on a seabed composed of thousands of discarded Vietnamese family photographs is one of these. Xu Bing’s poignant ‘Where the Dust Itself Collects’, made from dust collected in the streets of Manhattan after the destruction of the twin towers, falls into this category also, as does his ‘Tsan Series’ in which he attached silk moths to papers and books bound in both Western and Chinese styles. As they laid their tiny eggs across the pages, these became a dot matrix of ‘text’. The eggs hatched, baby silkworms emerged and began to enshroud their habitat in their cocoons, spinning out silk tirelessly in ‘an embodiment of the persistence of culture’ (Alice Yang). That may be so, but the work is also about the precariousness of life and its permeability: passages from one state of being to another. Xu Bing deals in allegory. So too does Shoufay Derz. Her strength is that she is able to take these ‘big ideas’ and significant philosophical/spiritual positions and imbue them with the authenticity of lived experience.

Depart without Return, like her earlier work, is elegiac and beautiful. It suggests great sadness while at the same time recognising that for those left behind the voyage continues. This is perhaps the very essence of lamentation. Derz uses landscapes – deserts, sand dunes, mangroves, volcanoes - in the way that the Romantic painters did – to convey psychological and emotional states – the ineffable, the sublime. The image of the boat figures largely in her work – from the early ‘Love Capsule’ and ‘Transportation Love Story’, to the glass sarcophagus in ‘Depart without Return’. The boat represents many things: journey, safe passage, migration - literal voyages across oceans charted and uncharted. It also possesses many metaphorical associations: the ark, Christian images of boats on the sea of Galilee, crossing the River Styx, the womb within which we journey into the world. The common thread here is about the passages between different states of being. Deaths and entrances.

In her work one can detect occasional references to the works of a number of artists who have dealt with text, with meaning embedded in materials, and with performativity, from Jenny Holzer’s ‘Lustmord’, to Ann Hamilton’s 1993 work ‘Tropos’ in which a figure sat at a small metal desk reading a book, burning away the printed text line by line. The text, transformed into smoke, became absorbed into the horsehair bundles which covered the entire floor. These artists explore notions of transformation. So too does Shoufay Derz. The blind silk moths fluttering on her indigo painted face in ‘Depart Without Return’ embody the cycles of transformation that we are all subject to.

Her intention always: to evoke a sense of unknowing in the viewer – a sense of wonder. Interested in evocation rather than representation, she asks us to consider, conceptually, how is it possible to represent the unknown?

Luise Guest has worked as an art educator in Sydney for many years prior to travelling to China on a NSW Premier’s Scholarship early in 2011 to further her researches into contemporary Chinese art and art education. Whilst in Beijing, Shanghai, Guangzhou and Hong Kong she interviewed more than 20 artists, curators and artworld figures, from eminent artists such as Wang Jianwei and Hu Jieming, through to emerging younger artists. Since her return from that first trip she has been writing and blogging regularly about Chinese art, and returned to China in 2012 to meet and interview more artists. She will spend two months in Beijing on a residency through Redgate Gallery late in 2013. As well as her own blog (www.anartteacherinchina.blogspot.com), she is a regular contributor to The Art Life and The Culture Trip. She has also contributed articles to Randian, Artspace China, and Peek365; as well as writing a catalogue essay about emerging artist Cui Xinming for the Edouard Malingue Gallery in Hong Kong.

Posted by Rhianna Walcott at 4:49 PM