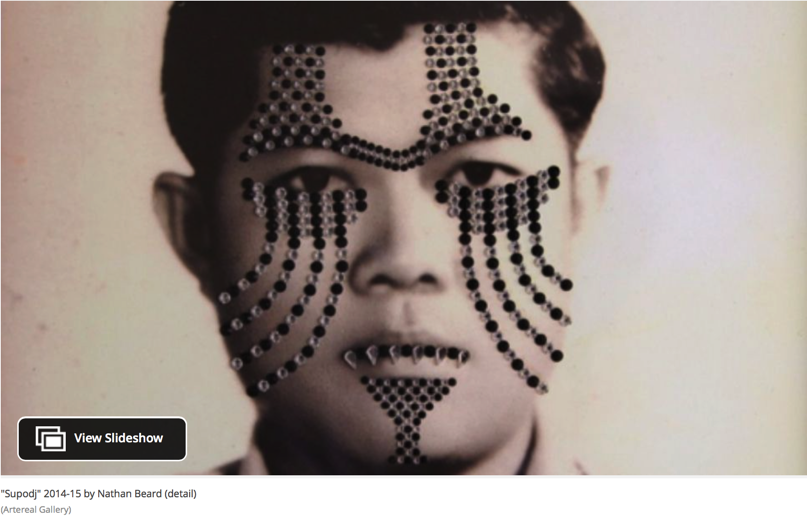 Last week, Blouin Artinfo's Nicholas Forrest popped into the gallery to view exhibiting artist Nathan Beard's current exhibition, 'Ad Matres'. This week, the review was published on Blouin Artinfo, which can be read either on their website here or below.

This Saturday 28 February is the last day to view Nathan Beard's remarkable exhibition at Artereal Gallery.

There’s something unique and entrancing about the works in Perth-born Thai-Australian artist Nathan Beard’s “Ad Matres” exhibition at Artereal Gallery in Sydney. Taking his mother’s familial ties and links with Thailand as his point of departure, Beard investigates the universal issues of culture, identity, and mortality through the lens of his Thai-Australian cultural heritage. What makes Beard’s investigations so intriguing is that he takes on the roles of artist, family member, and historian, yet in his work he conflates them all, collapsing them into each other within a compelling framework.

The namesake body of work comprises a series of manipulated prints of vintage portrait photographs that depict deceased and estranged family members from the once abandoned home of his mother in Nakhon Nayok, Thailand. The artist’s mother returned to Thailand after finding out that her brother had been diagnosed with a terminal illness, giving Beard the opportunity to trace her journey and learn more about his family.

Beard has painstakingly encrusted the images of the portraits with intricate and somewhat kitsch crystal rhinestone patterns that reference the burial and death masks of different cultures as well as runway fashion and the crystal-decorated smartphone covers that are commonly found for sale at market stalls. Drawing in the viewer with the seemingly innocuous photos and the familiar crystal embellishments, Beard initiates a metaphysical and sociocultural dialogue that has the potential to continue well beyond the confines of the gallery space.

One of the most poignant works is the photo of the artist’s own mother as a young woman. Her exotic beauty is punctuated by a trail of crystal tears that glisten in the light; her distant yet emotive gaze denies a more intimate connection, but also encourages the viewer to speculate on the focus of her attention and the subject of her thoughts. The combination of the glamour-style pose, sparkling crystals, tear motif creates a sense of uneasy tension that pervades the entire series of works. At once intriguingly compelling, hauntingly beautiful, and strangely familiar, Beard’s “Ad Matres” series is the epitome of elegance and restraint.

Hanging across from the portraits is the lone work “Sorores_2014-15,” the basis of which is a mirrored photo of his mother as a teenager in a beautiful landscape scene. Beard has blacked out one of the mirrored images of her mother as a reference her twin sister who passed away when she was a toddler. Below the remaining figure, on top of the frame glass, is a pattern intended to vaguely indicate the shape of Thailand, according to Beard, while the visible streaks underneath are meant to convey a pool of trickling water. Underneath the blacked out section hides a pattern in the shape of a stream of tears that runs in two lines under the eyes of the figure. Beard’s hand is much more obvious in this work, but the hand of which role remains a mystery.

Explaining the inspiration for the photo-based works, Beard said: “With my own Thai-Australian background, I’m interested in how exploring and playing with archives of family photos, stories and documents acts as a form of auto ethnography that is always being renegotiated.

“Introducing this meticulous process to these photographs is a way of nurturing a personal engagement with the memory of my mother’s family, using an aesthetic that slyly references contemporary crafts and ephemera like crystal encrusted smartphone covers that are ubiquitous in South East Asia. The series uses these portraits to collapse the past with the present, bridging tradition with modernity from a personal and universal perspective.”

Complementing the photo-based works is a video entitled “Obitus” which features an interview with the artist’s mother as well as footage of her house in Thailand and the surrounding countryside. The addition of interventions of fog and neon is a means of “lyrically translating the confessional content of my mother’s interview,” according to Beard. The neon sign in the video is a Thai proverb written in his mother’s handwriting which translates to “leaving home is like a bird leaving the nest.” Once again the boundaries and dimensions of Beard’s manipulations remain unclear, affording the viewer a more pure and uninhibited experience of the work.

Beard explains, “’Obitus’ observes and is steeped in specific visual signs and symbols from my mother's Thai culture and spirituality, conflating this with a deeply personal narrative about homecoming, migration and displacement. However the generosity of this exchange between generations, and the rumination of broad, universal themes of mortality, memory and place within the work affords it a particular accessibility and poignancy.”

The genius of Beard’s simple yet sophisticated manipulations is that the artifice dissolves the hand of the artist to the point that questions of authorship and origin arise. The works refuse to be categorized, instead occupying an ambiguous space between cultural artifact, contemporary artwork, and memento mori. And although the background narrative adds another layer of complexity, it is not crucial to an understanding and appreciation of the works, which is an indication of Beard’s talent, knowledge, and foresight.

Nathan Beard’s “Ad Matres” is at Artereal Gallery until February 28, 2015.
Posted by Rhianna Walcott at 3:13 PM