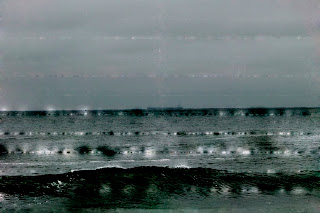 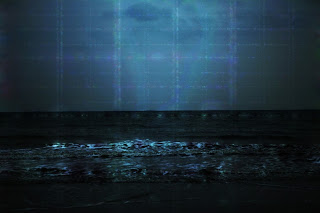 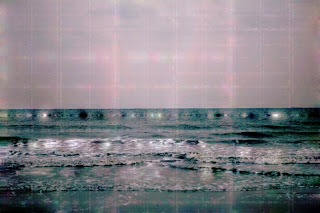 Oscillation #7, 2006, Lightjet print, Ed /8, 72.6 x 101.2cm
Artist Statement - 'Oscillation' series:
Many of the landscapes I am familiar with alienate me in their perfection - nature in these images is mollified, pristine, encompassing, perspicuous.
Nature for me is messy, turbulent, extinct, violent and entropied. In which case, its turbulence and violence will eventually condition our view of it. We can no longer see straight ahead, no open roads, no clear skies, but troubled shorelines and trespassed borders.
The works recreate that turbulent outlook through a process of intentional errors. Mimicking the antiquated stereoscope, two views of a distant horizon were made, one slightly angled from the other.
I asked the computer to repeatedly correct one side based on the other, akin to asking the computer to recreate the stereoscopic 3-D illusion on a 2-D surface. In other words, to see exactly as our eyes, natural stereoscopes that they are, see. Because this is technologically impossible, errors appear, errors which I think are beautiful, and I subsequently exacerbate.
Jason Wee is a Singapore born artist who lives between Singapore and New York. He completed a Masters of Fine Arts in Photography at Parsons 'The New School of Design' in New York, before going on to found and run Grey Projects, an artist-directed alternative art space in Singapore.
Jason has been a practicing artist since 2002 and has shown his work internationally in numerous group and solo exhibitions. His work has been shown at the Chelsea Art Museum (New York), Singapore Art Museum, Peer Gallery (New York), Photo New York, PS122 Gallery (New York), Asian-American Art Center, Art Seasons Gallery (Singapore). Career highlights include exhibiting his large-scale installation ‘1987’ at the 1st Singapore Biennale in 2006.
Jason Wee has been a finalist in a number of art prizes and in 2004 was the winner of the prestigious Shell-National Arts Council Award, Singapore’s largest award for emerging artists. Wee was also a 2005-2006 Studio Fellow at the Whitney Museum Independent Study Program, and in 2007 he completed a residency at Artspace, Sydney.
His work has been reviewed in numerous publications including Artnews, the New York Times and the Wall Street Journal.
﻿
Posted by Rhianna Walcott at 2:11 PM