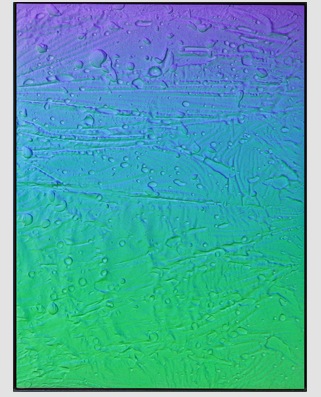 Michael Staniak_SO/IMG_526, 2013_acrylic and casting compound on board, steel frame_90 x 60 cm_Image courtesy of the Artist and Block Projects.

Michael Staniak is currently exhibiting a new body of work entitled STANDARD OUTPUT at Block Projects in Melbourne. The exhibiiton runs from 20 August - 14 September 2013 with the exhibition opening taking place on Saturday 24 August from 2-5pm.

"In computer programming, standard streams are preconnected input and output channels between a computer program and its environment (typically a text terminal) when it begins execution. The three I/O connections are called standard input (stdin), standard output (stdout) and standard error (stderr)[...] Standard output is the stream where a program writes its output data." - Wikipedia

Although these terms are no longer used in today's computer graphic user interface, the process is quite similar. As a user we no longer need to know code, however we input data via keyboard, mouse or touch pad, and the resulting output is displayed instantly on the screen. Using standard graphic programs like Photoshop, MS Paint and Google Sketchup and the distributive abilities of social media, our visual ideas are easily digitally illustrated, uploaded and shared globally via like-minded individuals and peer groups. The tropes now associated in computer graphics, although at times a somewhat generic aesthetic, have become commonplace. As our connections with digital media and screen technology become more fluid, so too does the flow of digital information back into our analogue environment. Is it a surprise then that more and more of these digital tropes are being repeated in an almost obsessive manner and are filtering into the language of painting?

With this in mind, the exhibition STANDARD OUTPUT not only explores some of these aesthetic shifts in painting that resemble a pseudo-modernist approach to process and form, but also examines this visually repetitious byproduct of social media, which at once could be read as a trending phenomenon or the beginning of a new "ism", something missing in contemporary art for the last decade. (Michael Staniak, Artist Statement, 2013)


Michael is also currently working on a new body of works which we will be exhibiting at Sydney Contemporary 2013 as part of the Artereal Gallery stand.

Posted by Rhianna Walcott at 4:15 PM