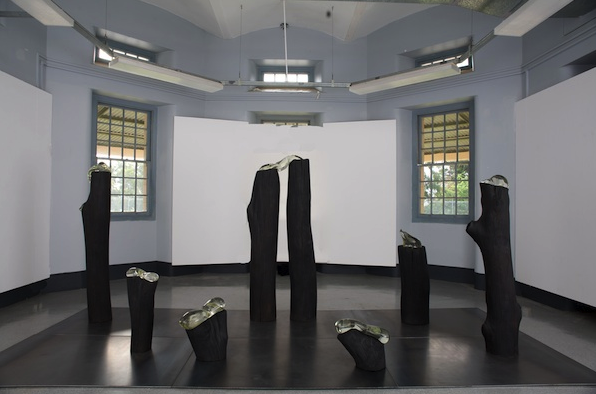 To top off what has already been a year of ongoing success for artist Stevie Fieldsend, her heady, emotionally potent work has most recently received recognition from both the Blacktown City Art Prize and the Sculpture at Scenic World Art Award.

Fieldsend has been shortlisted in the Blacktown City Art Prize for her artwork, Solve et Coagula #22, which slumps thick-shaped biomorphic molten glass over and inside a series of dark, truncated vertical forms. The hot glass itself assumes and picks up an imprint memory of the wood grain, is separated, and then when cooled is laid back down over the standing forms. The memorial-like sculptures call up a feeling or sensation, of a past event; invoking emotions associated with longing, grief and death.

Entered by hundreds of artists, the Blacktown City Art Prize has grown in popularity and reputation to become Western Sydney's premier art prize. Now in its nineteenth year, it features outstanding works by local artists, from across NSW and a special exhibition of works by children and young artists.

Now in its fourth year, the Sculpture at Scenic World Art Exhibition includes 31 artworks from 33 artists and will see Scenic World's natural Jurassic rainforest in the Blue Mountains transformed with world-class sculptures installed in Jamison Valley along the longest boardwalk in Australia. The exhibition culminates in a series of awards, including a $20,000 Scenic World Non Acquisitive Award, $5,000 Artist Peer Award, $2,000 Scenic World Staff Choice Award, The Carrington Hotel’s $1000 People’s Choice Award and a $250 freight subsidy for all interstate and international artists. One artist will also be awarded the Blue Mountains Cultural Centre Exhibition opportunity to exhibit from June to July 2015.

An exhibition of artworks shortlisted for the Blacktown Art Prize is on now at Blacktown Arts Centre from 6 December - 10 January.
Posted by Rhianna Walcott at 1:19 PM