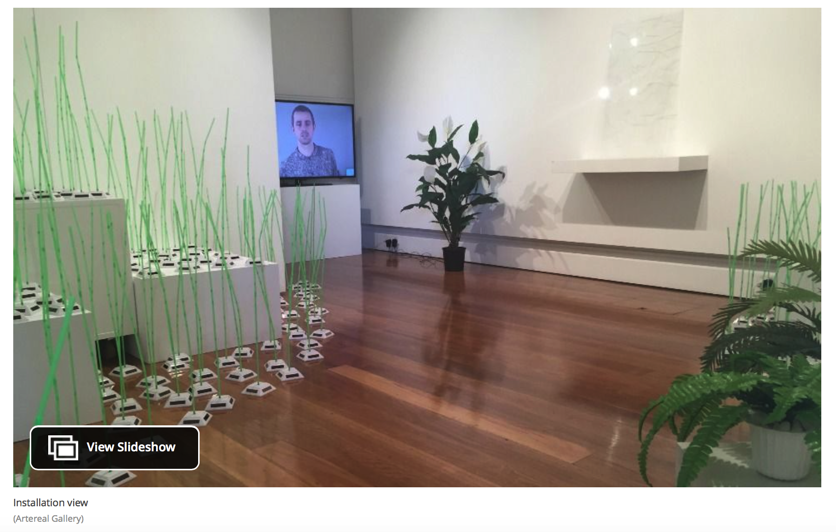 This week, his review of Tully Arnot's 'Trace Etc' was published on Blouin Artinfo, which you can read either on their website here or below.

Saturday 28 March is the last day to view solo exhibitions from Liam Benson and Tully Arnot at Artereal Gallery.

Tully Arnot’s exhibition “Trace Etc.” at Artereal Gallery in Sydney showcases the depth and scope of the up-and-coming Sydney-based artist’s intriguing and innovative practice. Continuing his ongoing interrogation of the way humans interact with technology and each other, Arnot investigates the increasingly contested space between virtual reality and reality itself, while at the same time uses humour to explore the absurdity of the human race’s obsession with technology.

At the basis of the works in “Trace Etc.” is a variety of motifs, phenomena, and concepts which Arnot has extracted and isolated from cyberspace and then reimagined in the “real” world as a group of poetic, innovative, and engaging interventions that strike the perfect balance between humour, seriousness, and aesthetics. The exhibition comprises a number of sculptural works as well as a video piece, which together evoke a range of sensations from déjà vu to anxiety to fascination.

“Cursor” is one of the simplest yet most effective and elegant works in the exhibition. As the title suggests, Arnot has reinterpreted the computer cursor as a relatively low-tech kinetic sculpture. Upon entering the exhibition space, visitors are confronted with a plastic cut-out of the cursor symbol which rotates in mid-air with the aid of a small motor. At once uncanny and disruptive, “Cursor” creates the illusion that the exhibition is being viewed through a computer screen.

In the gaming world, the realism of the grass is a key indicator of the quality of a virtual environment. “Meadow (IRL)” reimagines the virtual grass of a game environment using fluro-green plastic straws which are animated by rotating solar display fans. It is a strangely hypnotic installation that although absurd is no more absurd than the pursuit of the perfect virtual representation of the natural environment.

Arnot’s “Nervous Plant” series is perhaps one of his best known bodies of work. Each of the artificial plants in the “Nervous Plant” series are activated using servo motors which are controlled by a light sensor that slows or stops the movement when its light source is blocked, whether it be from a shadow or the shutting off of the lights. The “Nervous Plant” works are a witty yet poignant reminder of just how blurred the boundary between the real and virtual world is becoming.

With the video work “Thoughts of absence, absence of thought,” Arnot has removed all the dialogue from a recently filmed interview, leaving only pauses, breaths, and sighs. The glitchy remnants of the interview could be interpreted as the effects of a virus of bug. Curator Rhianna Walcott explains that the work “examines the subtle traces which a steady stream of constantly evolving technology is leaving on the human psyche and the way in which we see and interact with the world.”

In the words of the artist himself, “Trace Etc.” is a “a suite of new works exploring different notions of trace – from residues, to transitional artefacts, to formal delineations of pathways. ‘Trace Etc.’ develops on my investigations into the blurring between digital reality and real life, and the tensions between CGI/Artificial Intelligence/robotics/etc., and more organic or natural elements.”

Tully Arnot “Trace Etc.” is at Artereal Gallery in Rozelle until March 28.
Posted by Rhianna Walcott at 10:00 AM