Anna Sabadini writes about her latest body of works Home, which can be seen at Artereal throughout September... 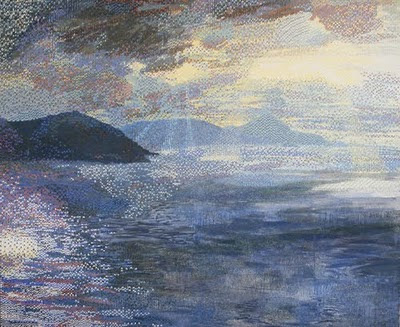 Knitted View East With Crepuscular Light Over King George Sound,
2010, oil on canvas, 180 x 220cm
The world, in Western thought is delineated. We do not usually think of the land beyond our cities as home. Wilderness is often perceived to be in opposition to culture. We are distant from land inasmuch as a metaphoric line separates us – it is the over there whilst I am here in the city, in my home. In Renaissance paintings, the landscape was used as a backdrop to human theatre; perspective ensured the centrality of the rational eye and light was a device that convincingly revealed form. Any pictorial space that was not taken by human forms was considered negative space. There was a sharp disjunct between human and land, between foreground and background.
When land is looked at, it is seen as landscape rather than home, as a picture view to run possessing eyes over. When I first moved to a town in the region of the Great Southern in Western Australia, I came with city vision, seeing lines. But my new home town is smaller than the city I left. Walking around the suburbs here, even from my front garden, I can see the land, the mountains, the sea, that circle my living room, my bedroom, my kitchen, my dinner table. The physicality of these out there places began to grow in my consciousness of home. Now, when I come back from trips to the city and reach the outer limits of the Stirling Ranges, I breathe a sigh of relief and think, “Ah, I am home.” They represent the outer circumference of home. The distance comes close to my heart. And as I walk through these places, I have come to know the patterns of their close-upness, the textures of the mallee vegetation around the Stirlings, the Porongorups, the coastal scrub. Moving through this sometimes prickly stuff, the space between me and the distance is further thickened with experience.
By painting three scenes of the interiors of my home in red, and three scenes of the surrounding landscape in blue, imagined as an installation of eight large landscape format paintings marking the four points of the compass, I am both stating and blurring the perceived Western division between home and land, between interior and exterior. What is our conception of home? Is this polarization our conception of home?
Anna Sabadini's solo exhibition Home is currently on exhibition at Artereal until the 2 September, 2010.
Posted by Rhianna Walcott at 12:22 PM