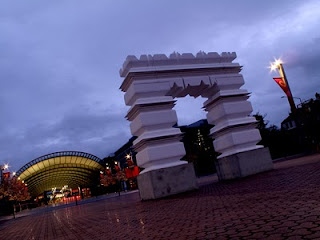 Gary Deirmendjian, arc de triomphe individuel,
concrete, steel, polystyrene and various coatings, 5m  x 5m x 1.6m
Sydney based artist Gary Deirmendjian's arc de triomphe individuel is a temporary public artwork created for the 10th anniversary celebrations of the Sydney 2000 Olympic Games which begin at Sydney Olympic Park on the 15th September.
The work is a formal archway in architectural scale, with outlines defined by the repeated line of a single normalised ECG (electrocardiogram) cycle. In this sense, it is suggestive of any individual, with a given moment from their continuum sampled and monumentalised.
Unlike its historical precursors, this arch is not dedicated to victory in war; rather, it celebrates individual triumph and human effort. More particularly, it is the athletes at the Sydney 2000 Olympic Games that provide the inspiration. Theirs were stories of commitment and possibility realised and their achievements are a fundamental part of the Park's ongoing legacy.
Deirmendjian expands "… for those passing through, I would hope that the act would serve as a small symbolic step towards the voices of their own calling."
'Arc de triomphe individuel' can be seen at Sydney Olympic Park from today.
Posted by Rhianna Walcott at 11:02 AM