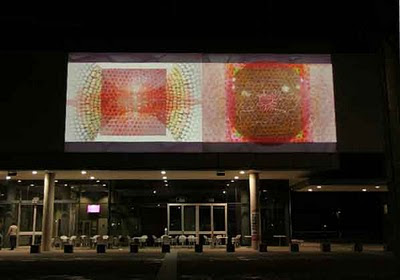 Installation shot: Glen Henderson, The Lightness Matrix, 2010
Glen Henderson will show The Lightness Matrix, a moving image work, at the Queensland University of Technology this November.
As the first person to be awarded the position of Creative Industries Artist in Residence, Glen Henderson's work can be seen at the Parer Place Screen nightly at dusk from the 19 November - 5 December 2010.
"The Lightness Matrix is a response to microscopic biological structures where all of the patterns are interrelated and the injection of each unexpected physical image reinterprets the space. From the smallest living organisms to designed and fabricated formations the lightness matrix looks at the way things are connected.
In this work, the connections that play out between the scientific, the architectural and the infusion of selected imagery may seem like leaps of the imagination. Yet the process of bringing this material together frame by frame transforms what might be read as disparate elements into a seamless language of idea." - Glen Henderson, 2010.
The Parer Place Screens provide experimental and innovative outdoor projections as part of QUT’s Creative Industries Faculty.
Posted by Rhianna Walcott at 1:56 PM