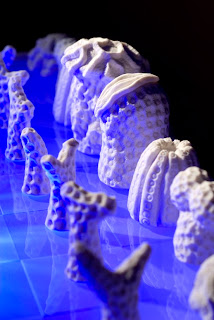 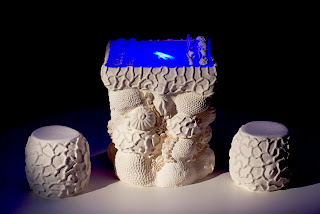 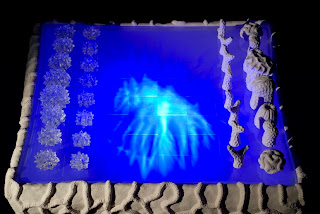 Ken + Julia Yonetani, Dead Sea - Chess Set, 2010, porcelain, glass, metal, LED wave light and electric components, 58 x 58 x 63 cm. Photos courtesy of Ian Hill.
Opening tomorrow night at the University of Queensland Art Museum is Your Move: Australian Artists Play Chess.
Inspired by the international exhibition The Art of Chess, this travelling exhibition was organised  by Bendigo Art Gallery who commissioned thirteen of Australia’s leading artists to respond to the notion of the game of chess. The result is Your Move: Australian Artists Play Chess an exhibition which aims to cement the role of Australian artists within the wider international art community, while also highlighting the skill and dynamism inherent in Australia’s contemporary art scene.
The works in this exhibition engage with a multiplicity of concepts, an example being Ken + Julia Yonetani’s ethereal porcelain sculptures which engage with issues of climate change and environmental degradation.
Your Move: Australian Artists Play Chess will be on exhibition at The University of Queensland Art Museum until 24 April 2011, before touring to McClelland Gallery + Sculpture Park in Victoria and the Samstag Museum in South Australia.
Posted by Rhianna Walcott at 5:35 PM