Artereal Gallery is very excited to recieve news that Carla Hananiah has been selected as a finalist in the prestigious 2011 Blake Prize  with her work entitled, Refuge. Congratulations Carla. 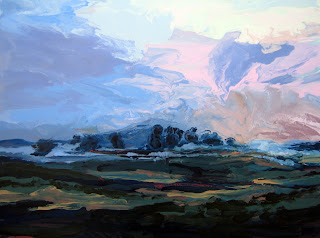 Carla Hananiah, Refuge, 2009, oil on board, 91.5 x 122 cm
Since its inception in 1951, The Blake Prize  has stimulated a fascinating dialogue between art and religion in all its manifestations in Australia. The Prize is named after the legendary British artist and poet William Blake (1757-1827) whose broad range of artistic and poetic innovations, visionary imagination and radical politics made him an outsider in his day.
The Prize was instigated by Jesuit priest, Michael Scott and a Jewish businessman, Richard Morley. They hoped that the establishment of such a prize would encourage artists of disparate styles and religious allegiances to create significant works of art with religious content.
Unlike other art prizes which are awarded for distinct genres such as landscape or portraiture, The Blake Prize has always invited a much more open, personal and idiosyncratic response, so much so that it has earned the criticism, ire and sometimes applause of critics and the public alike. After all, what is religious or spiritual art?
Posted by Rhianna Walcott at 12:28 PM