Glen Henderson presents part two of the The Lightness Matrix, a three-part Parer Place Project which was developed during her residency at the Creative Industries Precinct in 2010. 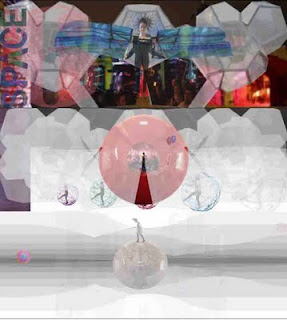 With space as its theme, Glen's second Matrix work harnesses the microscopic and organic patterns of Matrix 1 to explore the nature of spatiality in both its physical and spiritual guises.
Henderson employs transitions reminiscent of puppet theatre. Introducing each scene, her characters command centre stage before flying off to sit within the props to watch. This narrative ensues until the curtains are drawn to a close and the story unfolds again.
Glen Henderson has worked across medium with a continuing interest and involvement in contemporary practice developed independently and in collaboration with architectural, science and technology professionals. Her practice developed after completion of a Master of Fine Art at QUT in 1996. She has an extensive exhibition profile in Queensland and nationally and is represented internationally. Previous opportunities have included the QUT Creative Residency and a Artist Studio Residency at Queensland Art Gallery
Matrix 2: SPACE was developed in collaboration with Erik Griswold of Clocked Out who have recently won the 'Award for Excellence by an Organisation' at the APRL / AMC Art Music Awards in Sydney.
Screening from dusk until 9pm
Posted by Rhianna Walcott at 1:51 PM