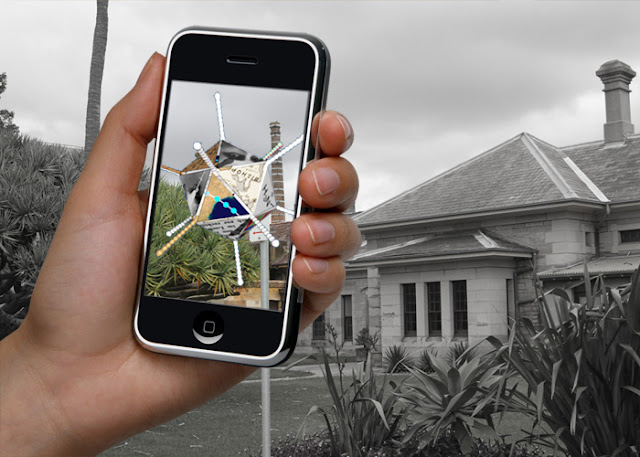 This March as part of Art Month Sydney and the launch of the Rozelle Contemporary Art Precinct, the second edition of (Un)seen Sculptures, a mobile 3D augmented reality exhibition, is being presented by dLux MediaArts.
The exhibition will be staged in locations along Darling Street, Rozelle (including Artereal Gallery!) and throughout the Callan Park precinct, and will feature works by Australian artists and international visitors from as far afield as the USA, China, Portugal, Germany, and the Netherlands.
Situated in these locations will be virtual digital works; hidden from the naked eye but visible to anyone with an iPhone, Android or Nokia smartphone and an app called the Layar Reality Browser, that can be downloaded for free from iTunes, the Android Market or the Ovi Store.
Once they have downloaded this app, people can simply open it up, search for “unseen”, select the layer set up for the show, then hold up their phones at the designated locations, and they will see 3D artworks. When these artworks are “touched”, further information about them will be revealed and other forms of interaction may be unlocked.
The locations for this year’s show can be found on this downloadable map.
dLux MediaArts will also be present free sculpture walks and talks with Warren Armstrong, the brains behind (Un)seen Sculptures. These walks are guided tours of the sculpture trail which is currently in place along Darling St, Rozelle.
Departing from the dLux Media Lounge at 703 Darling Street Rozelle at 1 pm every Saturday during March, these walks will finish at 2 pm in Callan Park.
Just bring your smartphone, android phone, iPhone, iPad or tablet and a hunger for cutting edge digital art.
1 - 2pm Sat 10, 17, 24, 31 March
To book: email info@dlux.org.au with your name and contact number.
(NB: Tours may be cancelled in the event of inclement weather.)
For more about previous showings of (Un)seen Sculptures, click here.
Posted by Rhianna Walcott at 3:54 PM