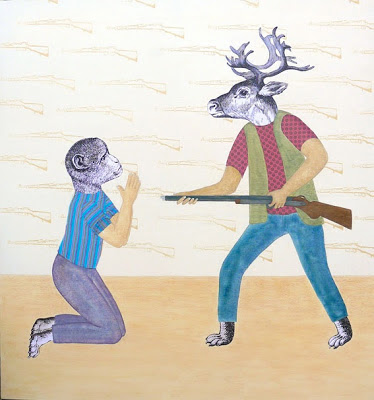 Launched in 2011, Sentience is an initiative of the Animal Rights Advocates Inc., a not-for-profit animal rights organisation based in Perth, WA.

Featuring work by a variety of international and Australian artists across a range of mediums, Sentience is a thought-provoking display of art exploring the lives of animals other than humans.

Amongst the participating artists of 2013, is Claude Jones, whom is currently undertaking a residency in The Netherlands. Claude's work often perversely transposes animals as both perpetrators and victims in her images, drawing focus on man’s double standards. The irony is that animals do not drug, cage and torture one another, train others to fight, race, perform tricks or slaughter en masse. Nor do they subscribe to the belief that circus animals take pleasure in performing, that greyhounds and horses enjoy racing, and that hunting is a "sport".

Posted by Rhianna Walcott at 3:30 PM