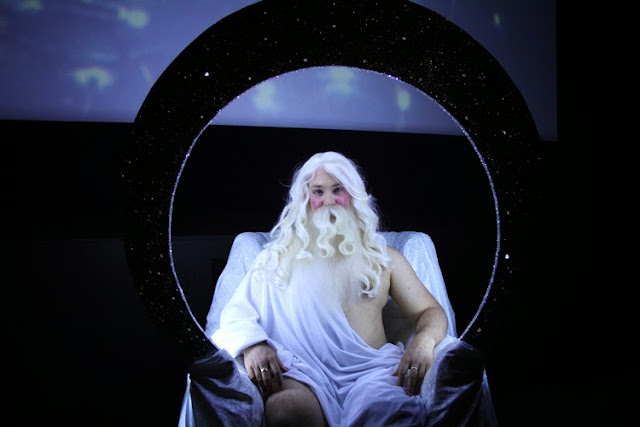 
Director's Choice is a curated performance program selected by Fair Director, Barry Keldoulis, that was showcased at Sydney Contemporary 13.

As part of the Director's Choice performance program, Liam Benson presented a new performance specifically commissioned for Sydney Contemporary. Expanding upon a recent photographic work entitled Santa, Benson will adopt and embody the persona of Santa in a performance which explores the complexity of national identity, cultural identity and gender.

"Santa depicts the iconic Father Christmas as a patriotic symbol who, haloed by two circles of stars, holds aloft a shimmering Southern Cross sceptre. The portrait suggests that the cultural figure characterizes more than just a festive season, but also contributes to the notion of a national identity within Australian culture.

Santa is part of a series of works that explores masculinity and male role models and iconic figures. The unofficial title of the series is “Noble Savage”. When I make work about men and masculinity, I am approaching the subject with a sense of empathy. I feel as though men need their own deconstruction of their gender culture, much like feminism.

In the works about men I am looking for the emotionally complex side of men which is often mixed in with a deep culture of obligation, duty and codes of conduct.

With Santa, I wanted to celebrate the wondrous mythological father figure. I liked the idea of Santa being the role model of nurturing generosity. I also wanted to draw the comparisons between depictions of ‘God’ and other spiritual depictions of father figures. I found it interesting that they usually have the same hair styles, white long beard and hair. I also liked that they were beautifully groomed and styled, in an almost feminine way.

I am also interested in the cultural significance of Christmas within national identity, specifically n Australia. I see the similarity between America and Australia’s depiction of Santa as a white father figure. I wanted to explore the under tone of Santa as an icon which reaffirms a white Christian ideology within a broader National identity."