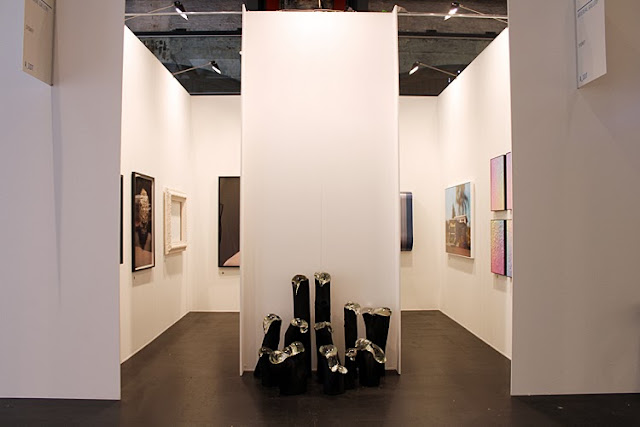 From the 19-22 September 2013, Artereal Gallery was part of the inaugural Sydney Contemporary Art Fair, held at Carriageworks.

Artereal brings a selection of artists’ works to Sydney Contemporary that unfolds a diversity of stories, ideas, and social issues; significant among them identity, environmental sustainability and art in a cyber age. The works are in a range of media, distinctive for the experimental approaches and techniques of the artists that push the boundaries of conventional practice in painting, sculpture and photo media.

Anna Carey‘s fascination is with cities like the Gold Coast, and Las Vegas; cities that are built on dreams, on leisure and the notion of escape. Her works are formed from remembered and imagined spaces, with the finished work an amalgam of sculpture and photo media. She firstly creates collaged architectural models with subtle disconnections - formed in much the way we process memories. When she photographs them she captures the blenched light associated with remembering; the languor, the somnolence of daydreams. Her works appear authentic, but are merely artifice; not unlike the perceptions of the cities and places that they mirror.

Black scorched tree trunks and the pure, pristine and fluid qualities of cast glass coalesce in the sculptures of Stevie Fieldsend as potent memorials to primal and cathartic rituals. The works by this artist of Samoan heritage invoke rites of purging and release, shedding and healing and emotive themes of fear, abandonment, memory, sexuality, love and death.

Queer identity informs the performances of Liam Benson that gently subvert community perceptions of gender, race, culture, sexuality and national identity. He mines the visual languages and communication forms of advertising and popular media for both the themes and the documentation in photo media formats of his performances.

Cultural dignity is also at the heart of Karina Wikamto’s arts practice. Her work pays homage to Chinese, including her father, living in Indonesia during the time of the Vietnam War who were subjected to extreme modes of cultural prejudice that included a veto on use of their given Chinese names. Her work is expressive of her father’s and succeeding generations whose lives and heritage are still tainted by the repercussions of this harsh regime.

Michael Staniak’s focus is the language of painting in a digital age. The industrial processes and modes derived from digital imaging, from compositional elements, the colour, the glitches to methods of input and output inform his works. He avoids evidence of the hand but stays away from the clichéd language of the pixel. Despite the technological impetus, his works are undeniably paintings. They are tactile, voluptuous and gestural. He exploits and celebrates the viscosity of the paint medium and the emotional qualities of colour while expressing and articulating the process, the moment and momentum of image generation.

Giles Ryder is another artist who takes a reductive approach to form, colour and line and the interpretation of light and space. Characteristic of his practice is Dazed and Blazed II in which Ryder implements his honed industrial painting skills to custom-make machine tooled metal forms and apply meticulous auto-lacquer finishes. The sleek reflective metallic surfaces impact our senses and extend our perceptions of space and objects.

The mountains, bogs and tussock lands of the dramatic post-glacial landscape of the Southern Alps of New Zealand is the setting for the oblique and ambiguous sci-fi-like narrative of Hayden Fowler’s photographic series New Romantic developed from the catastrophic New Zealand bird extinctions, and a sense of loss and nostalgia for depletion of the ecosystem and of Maori culture. A corresponding melancholic wistfulness for man’s present day disconnection from the natural world and the scourge of species extinction pervades the prehistoric forest inhabited by hybrid exotic birds and poultry in Fowler’s video New World Order.

The picture frame cast in salt by collaborative artists Ken and Julia Yonetani is made from groundwater salt sourced from the Murray Darling Basin, an ecosystem that is extremely vulnerable to salinity. The significant choice of salt, and portrayal of an intentionally empty frame is at once a considered response to environmental degradation and also to the still life genre [nature mort], an artistic tradition that emerged in the sixteenth century as intensive agricultural practices were being developed, bringing new food produce to the tables of a rising European bourgeois class and the themes of consumption, luxury, vanity and mortality portrayed in these early paintings.

The work acknowledges the collaboration of Peter Paul Rubens and Jan Breughel the Elder on the Five Senses cycle of paintings (sight, hearing, smell, touch and taste) a series epitomizing indulgent consumption of the period. In this context salt becomes a metaphor for the rise and fall of civilizations throughout history, and the issues of environmental decline, climate change, and food security that face us on a global scale today.

Jess MacNeil is a London based Australian artist working predominantly in experimental painting and video. Her video, Angle of incidence shot in Paris in 2012 on the Pont des Arts, a pedestrian bridge crossing the Seine River in the vicinity of the Louvre, continues her preoccupation with space and with such esoteric concepts as ‘the shape of between’; the geometry and interstices between our individual vantage points - be they physical, perceptual or psychological, and also as manifested in the context of time and change.

The work of London based British performance artist Francis Thorburn seems to exist in a time that is not quite now. In his video of Free Ride the artist takes the title ‘Minister for Alternative Transport’ and introduces his seemingly cobbled together sculptural device, a heavy wooden wheeled vehicle, to London commuters and tourists. The rickety contraption lumbers through the busy roadways and traffic arteries with a delightful awkwardness, necessitating a use of physical energy to propel it that meets its transport needs, but with a noticeable lack of economy. However, what soon becomes clear is that this nonsensical instrument of transport is in fact not created for transport alone but rather as an opportunity for engagement. His works have been commissioned by both the Tate Modern and Tate Britain galleries.

Posted by Rhianna Walcott at 12:00 PM