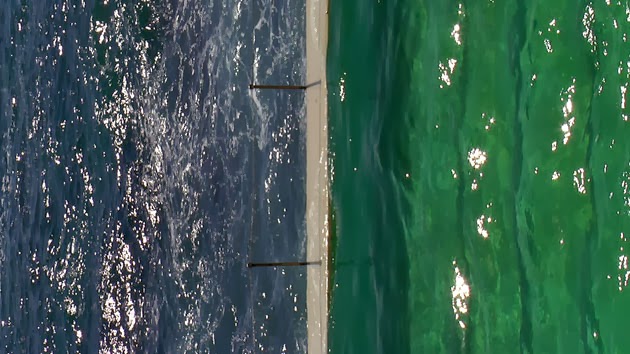 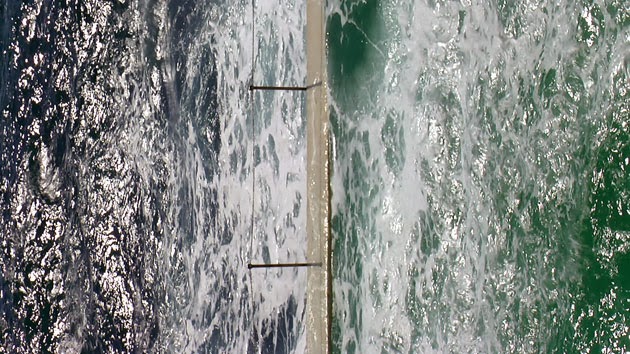 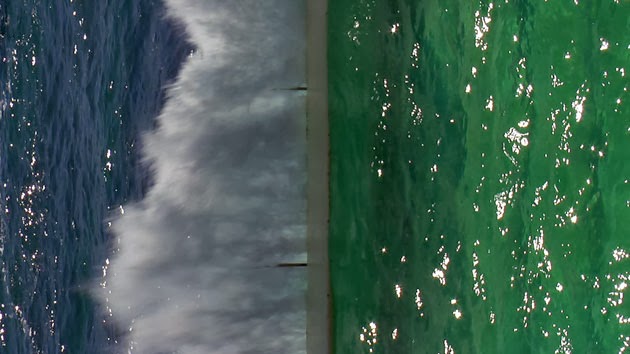 "Striking Contrasts is the second in an ongoing subscription series of curated video art packages developed with touring partners, Museums And Galleries NSW. Striking Contrasts manifests an erasure of barriers between between film making and fine art, tracing tendencies in contemporary screen based art.

Using two screens in concert, Striking Contrasts overturns the notion of discord, presenting pairs of works within an oppositional framework to draw comparisons between them.What emerges from this visual conversation is a picture of media art that is being produced in Australia at the moment. Some overarching tendencies include appropriation, themes of transcendence and rapture, fetish, the body, performance and spectatorship."

Included in this line up is Jess MacNeil's 2009 work The Swimmers - a video which presents an apparently simple scene of an ocean pool against an ocean backdrop, played in slow motion, looping endlessly and seamlessly.

The scene is cropped to a minimal, perspectivally flattened composition. The defining geometry of the central concrete wall is expanded upon in the geometric lines of the swimming pool. Beyond the wall, the powerful force of the ocean wells and pulls in organic contrast, swirling and pulsing against the wall.

The absent bodies of the swimmers are emphatically implicated by the surrounding context. The ripples and shadows they cause allow us to follow graphically the effects of their passage through the water. They fan out over time, interact with the architecture of the pool and the ripples of other swimmers, fluctuate in the light, accommodate a missed stroke.

That the swimmers are gone but their effect remains highlights the repercussions of our presence and actions, left to play out in our wake. On one hand this alludes to chaos theory and the bewildering possibilities implied by what is commonly known as “the butterfly effect”.

Striking Contrasts will tour regional galleries throughout Australia including:

Posted by Rhianna Walcott at 12:10 PM